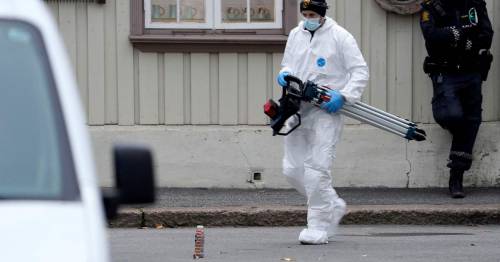 The man suspected to have carried out the horror bow and arrow attack in Norway had converted to Islam and concerns had been raised he had been radicalised, police have said.

Five people were ruthlessly killed in the town of Kongsberg in the south-east of the country on Wednesday night, while another two were injured. The victims were aged between 50 and 70 and it is believed they were attacked after police first confronted the man.

A 37-year-old Danish citizen was arrested and charged following the incident and is believed to have acted alone.

A terror probe was launched, as the suspect's lawyer said the accused was cooperating with detectives.

Police have now said the man had converted to Islam and had been flagged as being potentially radicalised.

The attack happened in a supermarket at about 6.15pm and saw an off-duty police officer shot in the back with an arrow
(

"There earlier had been worries of the man having been radicalised," Police chief Ole B Saeverud told a press conference. Officers had last been in touch with the man in 2020, the BBC reports.

The man, who lives in Kongsberg, which is 42 miles from the capital of Oslo, reportedly opened fire in a Coop Extra supermarket at about 6:15pm, injuring several people including an off-duty police officer who was shot in the back with an arrow.

The suspect is said to have been involved in a confrontation with police at the scene and attempted to run away before being apprehended after officers fired warning shots, just over 30 minutes after officers were first alerted.

Witnesses claimed the attacker began firing into a supermarket with arrows measuring around 70cm long, according to a local journalist.

Following the attacks, the police directorate said it had ordered officers nationwide to carry firearms. Norwegian police are normally unarmed but officers have access to guns and rifles when needed.

"This is an extra precaution. The police have no indication so far that there is a change in the national threat level," the directorate said in a statement.

One shocked woman said only narrowly missed being caught up in the rampage at the supermarket thanks to her stopping for a cigarette.

The traumatised witness, named only as Hasine, recounted how panic set in when she saw someone run past her terrace and then spied a man standing on a street corner with a quiver over his shoulder and a bow in his hand.

Hansine told TV2 the armed man soon disappeared and she saw people running for their lives, including a woman cradling a child in her arms, as tales of terror emerged following the deadly attack in Kongsberg.

Other witnesses have described seeing victims' bodies on the floor and hearing screams for help.

Ida Skinness was on her way out when her flatmate shouted at her to stay inside.

Ida told TV2: "Then I heard howls and screams outside, and saw people running and then a lot of blue lights."

Photos on social media show discarded arrows on the street, while NRK published an image of an arrow sticking out of a wall.

Norway's TV2 reported the suspect was also carrying a knife or other weapons.

Police said they were investigating whether any other weapons had been used.