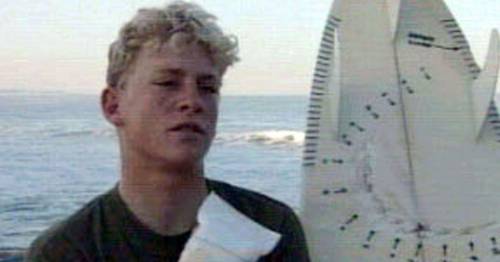 A surfer was attacked by two great white sharks at once when he was 15 years old but managed to paddle to safety using just one hand.

Shannon Ainslie, from South Africa, has shared his experience, recalling how he found the courage to get back into the water after the terrifying encounter.

The surfer had just finished his first day at school after the winter break when he went to Nahoon Reef – a popular surfing spot in the Eastern Cape Province – with his brother and some friends.

He said the water was warm for winter, the waves were perfect and there was no wind.

Would you get back in the water after a near-miss like this? Have you say in the comments

The surfer paddled to safety with just one hand
(

Sharing his experience with The Guardian, Shannon said the surfing session started well, but half an hour later, his brother and some friends got out of the water as they felt "uneasy".

He explained that there was a faint smell of sardines in the air, which can attract sharks.

Despite this, however, Shannon and others decided to stay in the water – and just moments later, two sharks attacked him.

He wrote: "Finally, I saw my first big wave, but as I was about to hit it, two four-metre great white sharks attacked me. It happened so quickly that I had no idea what was going on."

The surfer said the first shark hit him with a lot of force, throwing him into the air and then dragging him underwater.

Despite his experience, Shannon has continued surfing and is not scared of sharks
(

Moments later, a second shark aimed for his head and shoulders, but missed.

Shannon recalled: "In a split second, it grabbed my hand and surfboard in its jaws, dragging me under the water with it.

"Under the water, another shark swiped for my head and my shoulders, but missed, because the other had got me first. That second shark ended up saving my life."

Shannon believes he is alive thanks to the second shark, as the first one probably became scared of the competition and lost his grip on him.

He said he saw one of the sharks staring at him under the water with its mouth wide open showing "a huge set of teeth" and a dark black eye.

When the sharks moved away, he swam to the surface, where he saw his surfboard with a bite mark on it.

Shannon said he is grateful to be alive
(

As Shannon got on the surfboard, he noticed his right hand was "hanging off" and his wristbone was "sticking out" as the shark had bitten through it.

There was also a tear in his wetsuit and his hands were bleeding.

He was about 100 metres out at sea by himself as everyone else had rushed outside of the water, the surfer said.

By that time, there were no waves so he was forced to paddle towards the shore with just one hand, which took about 20 minutes.

Shannon was taken rushed to the hospital, where he was given 30 stitches in his right hand and surgery to repair the hole in his wrist.

The surfer admitted the encounter changed his life, but his passion for surfing did not stop.

He said that after the attack he started a surfing school in Jeffreys Bay and later relocated to Norway to teach the national surfing team.

Shannon added: "I was more afraid of sharks before my attack. Now I'm just grateful to be alive."

Since records started in 1905, there have been a total of just 248 unprovoked attacks in South Africa, according to Shark Spotters.

Of the total, 103 occurred in the Eastern Cape, 90 in KwaZulu-Natal and 55 in the Western Cape.

The main species responsible for the majority of attacks are tiger, bull (or Zambezi) and white sharks.

Previous : Dad, 42, crushed to death at McDonald’s drive-thru in freak accident named – World News
Next : Inside Emma Raducanu’s US Open celebrations at party that went on ‘until 4.45am’