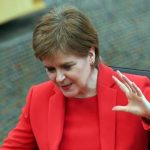 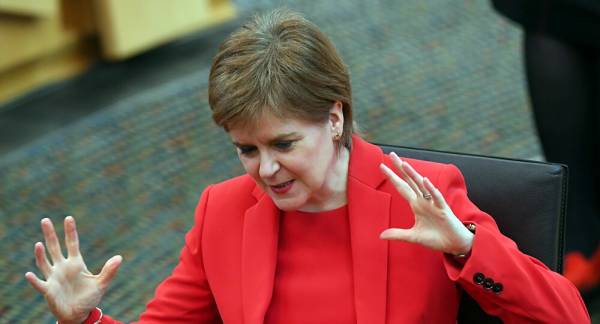 Earlier, a second Scottish National Party MP defected to ex-First Minister Alex Salmond’s Alba party, with polling experts suggesting the newly-formed nationalist and pro-independence party could deprive Nicola Sturgeon of the majority she seeks as a mandate for a second independence referendum.

First Minister Nicola Sturgeon seemed to target a verbal tirade at her predecessor, Alex Salmond, as she blasted a spate of recent defections from her Scottish National Party (SNP) on Monday, reported the Daily Mail.

“I don’t have much time these days for the ”who’s up/who’s down” approach to politics. And I definitely have much less patience for those who treat politics like a game – and for indulging anyone who puts self-interest ahead of the country’s best interests,” said Sturgeon, speaking in Glasgow as part of the SNP’s election campaign.

Our Political Correspondent Alan Smith also asked about defections from the SNP to Alba pic.twitter.com/YfpNh44qhG

​Ahead of Scottish parliament elections, which will be held on 6 May, two senior councillors announced earlier they were quitting the party to side with the former First Minister, Alex Salmond.

“If the last year has taught us anything it’s that politics is about improving people’s lives or it is about nothing at all. And that takes purpose and hard work,” said Sturgeon.

On 26 March the ex-First Minister announced that the newly-formed Scottish nationalist and pro-independence political party – Alba – would stand candidates in the elections in a bid to strengthen the movement for Scottish independence.

When launching the party, he denied the “new political force” would rival the Scottish National Party, claiming that the presence of other pro-independence parties in the parliament would only “weaken” the position of the Westminster government in withholding powers to grant a second independence referendum.

The defection of Michelle Ferns, who sits on Glasgow City Council, and Ellen McMaster, representing Arran on North Ayrshire Council, followed the decision of two Westminster SNP MPs to join the Alba ranks at the weekend.
The representative for Kirkcaldy and Cowdenbeath, Neale Hanvey, revealed on Sunday he would be a candidate at then May elections, after former SNP justice secretary Kenny MacAskill had already announced a move to quit party ranks.

“The Alba Party provides a tonic for our movement with an unashamedly optimistic vision for Scotland’s impending transition to an independent European nation,” said Neale Hanvey.

“Everything I do is about that vision of where we want to go as a nation. The SNP has made massive improvements to the lives of the people of Scotland. It feels like we have stalled. It’s time to galvanise the movement,” Ellen McMaster was quoted as saying by The National.

During the press conference launching the Alba party on Friday, Salmond dodged questions about his ‘suitability’ as a candidate and allegations regarding his previous treatment of female staff.

In Tuesday’s final report of the committee on the Scottish government’s handling of harassment complaints against Salmond, it was stated there was a ‘culture of complicity’ around the ex-First Minister’s allegedly inappropriate behaviour during her tenure.

The official report by MSPs contained testimony from the two women who originally made sexual harassment complaints against Salmond.

There has been ongoing internal strife within the Scottish National Party (SNP) between supporters of the current and former party leaders triggered by a sexual harassment probe into Alex Salmond.

Following a subsequent police investigation and trial, a jury acquitted Salmond of all charges.

Here are the conclusions of James Hamilton in finding that the First Minister of Scotland did not breach the ministerial code! Nicola Sturgeon became the leader of the Scottish National Party (SNP) on November 14 2014 & was sworn in Scotland’s First Minister on November 20, 2014. pic.twitter.com/w5tWZWutlt

​Alex Salmond insisted that Nicola Sturgeon, earlier cleared of breaching the ministerial code over her dealings with him around the claims, ‘should be the First Minister’ despite the launch of his splinter part, and Alba will only contest regional list seats.

“I believe that she should be the First Minister because the SNP should win a handsome majority. She is the only viable independence…. I have no ambition to be in government. I am standing for the Alba Party on the list to build an independence super-majority,” Alex Salmond was quoted as saying by the Sunday Mail.

“The good thing about (Mr Salmond) now having his own party is I don’t have to spend much time talking about him or thinking about him any more.”

Polling expert John Curtice, a professor of politics at Strathclyde University, weighed in on the developments.

​Alba could rob Nicola Sturgeon of the Holyrood majority she was seeking as a mandate for a second independence referendum, he told BBC Radio Scotland’s Sunday Show.

“The risk to the SNP is that if Salmond gets 4% or 5% of the vote, particularly in those two crucial regions, and those come from the SNP, he may put them down a peg, lose them one or two seats and as a result make all the difference between an overall majority or not.”