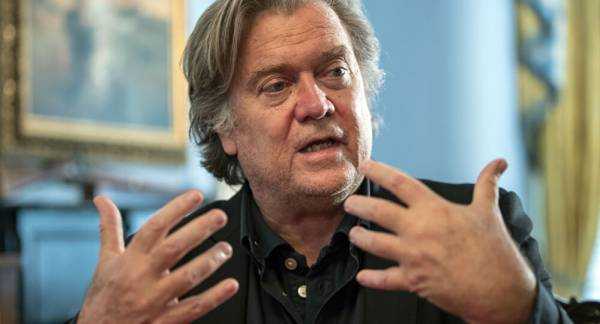 The former Trump campaign PR pro suggested the western world is actively building a case against Beijing, attempting to prove that the novel virus “leaked from a Wuhan virus lab”, claims denounced by China as a bunch of “conspiracy theories”.

Staffers from the Wuhan laboratory, which has now taken centre stage in the debate about the origins of the coronavirus pandemic, “defected” and landed in the hands of Western intelligence, Donald Trump’s former campaign strategist Steve Bannon told the Mail on Sunday.

In an exclusive interview with the British media outlet, Bannon claimed that spies, who he said also have “compelling evidence”, were building a case against Beijing based on the assumption that the global pandemic had ostensibly been caused by a leak from the Institute of Virology in Wuhan.

“Regardless of whether it came out of the market or the Wuhan lab, the Chinese Communist Party’s subsequent decisions hold them guilty of pre-meditated murder”, Bannon was quoted as saying.

He contended that he knows “certain defectors are working with the FBI here to try to knit together what happened” at the Wuhan Institute of Virology, which he claimed was “horribly run and terribly mismanaged”.

The US PR pro also warned about the coronavirus case potentially “destroying the West”.

“They [China] used the time to scoop up all the world’s personal protective equipment. This is a murderous dictatorship. The blood is [also] on the hands of the world’s corporations – the investment banks, the hedge funds, and the pension funds”, Bannon explained, urging European countries and the US to start “calling it out before it leads to the destruction of the West.”

The claims about the source of the virus, which has so far taken over 560,000 lives worldwide, came as Western governments scramble to gather evidence to challenge Beijing’s assertions that the infection first spread from a market. The Chinese government’s own Centre for Disease Control and Prevention has recently admitted that the virus was brought to the market, rather than originating there.

Yet, the claims about a laboratory leak have been vehemently dismissed by the Chinese authorities as “conspiracy theories”, with Beijing denying any cover-up after the first cases were reported and arguing they have been absolutely transparent on the matter. They stressed that they had reported without hesitation about the first COVID-19 flare-ups as soon as the information provided by Hubei Province, where they first emerged, was verified.