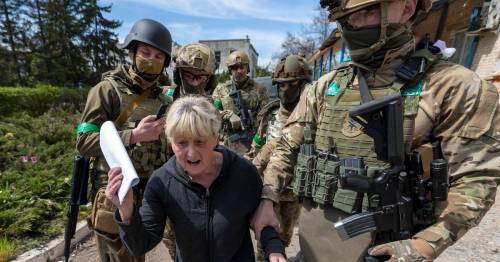 A combination of elite special forces troops and intelligence agents swooped on a village leader who was accused of high treason.

This came as a part of a nationwide crackdown on traitors and those suspected to be aiding Vladimir Putin and his forces.

The Ukrainian soldiers convened on Kutuzivka, in rural Kharkiv province, approaching in an unmarked car.

Their target was Nadiya Antonova, the secretary of the local council who stood accused of revealing the names of the brave Ukrainians that formed the spine of the local resistance.

The woman being arrested in the village and taken away wearing handcuff by the SBU soldiers.
(

Prosecutors said she turned on the soldiers, police and counter-terrorism specialists who were protecting her country as well as passing on the identities of hunters and park rangers whose knowledge of the countryside would have made them effective fighters, The Sun reported.

The powerful official was tracked down cowering in the basement of a bombed-out government building.

She was read her rights under martial law and frogmarched past the small number of residents in the nearly abandoned village.

As she was taken away she shouted: “Traitor! You think you’ve found a traitor? Shame on you. I was here the whole time. How do you think we lived here?”

Among the accusations against her was that she reportedly forced residents to wear white armbands in a show of support of Russian troops.

Nadiya reportedly used the call sign ‘Knight’ as she worked with Russian forces.

Alongside her, a second official was snatched in a coordinated raid in the town of Staryi Saltiv, on the frontline.

Eduard Konovalov, chairman of his local council, reportedly chose to side with the invading Russian troops and supplied them with housing as well as pushing for his fellow countrymen not to resist.

For their crimes, they both face life behind bars for treason.

This all comes as Kharkiv’s chief prosecutor Olexandr Filchakov, accused Russian troops of torturing and murdering the fighters turned in by the Ukrainian traitors.

He said: “They take them to camps and torture them, especially anyone with links to the police, the intelligence or army veterans.”

His team face nearly 1000 probes over war crimes including 29 accusations of murder and one rape.

Some of these include four mayors and a number of council deputies. He added that Kharkiv had one of the heaviest caseloads.

The Russian-speaking region shares a border with the country and a number of people have family ties across the border.

“The future of Ukraine directly depends on the strength of our resistance in all its forms.

“And I am grateful to everyone who understands this, who does not stop resisting even when it seems that the result is very far.

“Because the darkest time is always before dawn.”