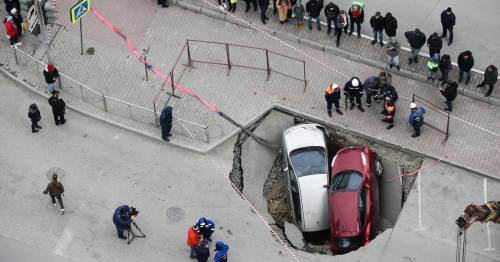 Two cars were dramatically swallowed up into a crater full of piping hot water when a sinkhole opened up on the crossroads of two streets.

A Toyota Corolla Spacio and a Nissan Juke became stuck in the crater after it opened up in Russia’s third largest city Novosibirsk.

An eyewitness told local news outlet NGS how the cars had completely sunk into the hole.

“One is just about afloat, the other is sinking. It’s awful,” one bystander said.

A Lexus which had been waiting at a red light was towed away from danger after coming to a halt on the edge of the precipice “as it was about fall into the boiling pit”, another local report said.

A view of the two parked cars in the massive sinkhole
(

The Toyota and Nissan were believed to be parked outside a business centre when the huge hole appeared on the road.

Luckily there were no serious casualties in the incident.

Steam was visible at the “mud volcano” which was a burst underground hot water pipe not far from the city’s landmark theatre and opera house.

The pipeline supplies hot water to keep homes and workplaces warm in the cold Siberian winter.

The accident caused water supplies to 21 blocks of flats and three hospitals to be cut off.

The supply issues were expected to be resolved later this week.

It is the latest in a series of similar accidents in the city, as last month cars, buses and trucks were stranded after holes opened in city streets.

And a woman faced a similar conundrum closer to home in 2018 when she came back to her parked car after work to find it had sunk into a '20ft-deep' crater in Wales.

Luke Davies said his mum Karen, from Swansea Valley didn't believe it when people told her what had happened – and she thought it was all a joke.

It took two vehicles to pull the car out of the sinkhole at Craig y Nos Castle in the upper Swansea Valley.

There were no serious casualties caused by the bizarre incident
(

Mr Davies said he was in Swansea when he had a call from his father telling him about what happened, reported Wales Online.

The 30-year-old said his mum – who works in the castle – had left the car in the car park in the morning and that not long before she was due to finish work at around 4pm she found out about the sinkhole.

"She was in shock and at first she thought it was a joke," he added.

They believe the sinkhole may have been caused by a stream of water coming from the mountain opposite the castle, he continued, eroding the ground under the car park.

In the end, they had to use a 4×4 Range Rover and the recovery vehicle to get it out, with both of them pulling at the same time, as they were concerned the car would go onto its side.