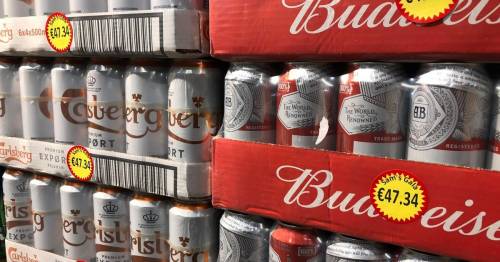 An Irish shop has come up with a cheeky deal that bypasses the country's new alcohol pricing law.

The move has strongly divided opinion.

Sam's Gala in Dunmanway has put up signs with a cheeky offer stating: "Buy 24 Plastic Glasses for €30 and receive a €47.34 credit note absolutely free. See instore for terms and conditions."

The credit note of €47.34 happens to be the price of big slabs of Budweiser and other beers – which would previously have cost considerably less, the Irish Mirror reports.

The social media post about the offer has been shared by thousands online as many have praised the tongue in cheek offer.

The owner has made no mystery on their feelings for the new law, posting last week: 'The name “MUP' is obviously the shortened version of the name of the person who devised this plan!!

"It stands for Minimum Unit Pricing and it’s effective from 10.30am tomorrow in the hope that it will reduce the amount that people drink.

"It goes against everything that every Retailer in the country spends their time trying to avoid, and that’s increasing prices.

"While there’s very little change across the wines and spirits range, the increase in the price of slabs of beer is astronomical with some going from €25 to €45.45 and from €29 to €47.34."

Last week, a man stocked up on a year's supply of beer at Aldi the day before the cheap booze ban kicked in.

Denis Boyle bought almost 300 cans of German pils and nearly 100 bottles of French lager claiming he "won't get ripped off" when the minimum unit pricing of alcohol came in.

Previous : ‘Selfless’ woman, 22, crushed to death by own car after it rolled back on driveway – World News
Next : This Morning viewers slam ‘healthy twist’ on chip butty in cooking segment