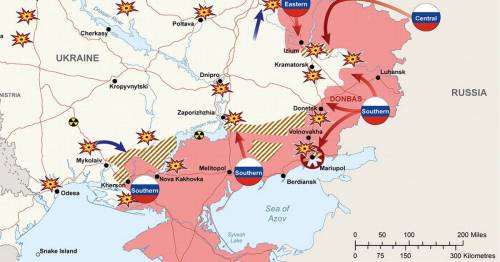 Shocking new maps claim to show the amount of territory Russian forces have lost in a matter of days in Ukraine.

A miscalculated plan saw the Kremlin chief expect to take capital city Kyiv within 48 hours of sending his troops in on February 24.

But over 11 weeks later, with that objective abandoned, the invaders are haemorrhaging soldiers, weapons and equipment.

And now they're losing much of the geographical gains made in the early weeks.

Nathan Ruser, a researcher for the Australian Strategic Policy Institute (ASPI), an independent think tank, shared maps showing the situation as of Tuesday (May 10).

Ukraine expert Michael MacKay said: "The Russians are retreating north of Kharkiv, shifted to the defensive around Izyum, and suffered a resounding defeat attempting to cross the Siverskyi Donetsk River at Bilohorivka.

"The Ukrainians have gone on the offensive in Kharkiv region west of the Siverskyi Donets River."

Putin's battle plan pivoted away from Kyiv last month and began focusing on the eastern and southern regions – but his men have struggled to gain any foothold.

John Spencer, a retired US Army major, told Salon the Russian military was considered second or third in the world before the war.

But its performance during what the Kremlin still insists is a 'special military operation' has shown it to be actually around 30th, he said.

"On paper, the Russian military should have been able to dominate the Ukrainian military and win in three days, based just on the size of the Ukraine military," he explained.

However, he said there's been a failure to properly predict the "fierce resistance" from within Ukraine, as well as the impact of weapons, supplies and support from the likes of NATO – not to mention superior intelligence information.

Mr Spencer added: "The Russian plan of attack in the beginning was not ridiculous. It was actually a solid plan, but they didn't have the military strength they thought they had to follow through on it.

"This conflict, in a larger sense, won't end for years. Russia will always contest the borders of Ukraine as a sovereign nation. But this war, the battle for Ukraine, will end within weeks or months. That is my opinion.

"We will see the Russian military in Ukraine reach its culmination point soon," he added.

In order to "prepare the society for a possible defeat" the country's state run media is being ordered to talk about the invasion as an "armed confrontation between the Russian Federation and all the countries of the European Union and NATO".

"According to Kremlin political strategists, this will lessen the shame of losing to a more powerful adversary," the news outlet claims.