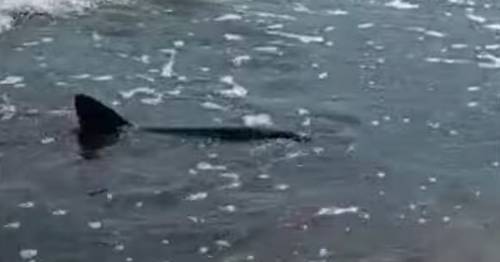 Lifeguards issued an urgent warning to bathers to get out of the water after a shark circled a Mallorca beach, sparking panic.

A lifeguard who was on duty ordered everyone at Cala Mondragó beach to stay away from the sea after the fins were seen breaking the surface of the water.

The Daily Star reports that mobile phone footage showed the shark looking confused and swimming aimlessly around the beachfront.

The dark shadow of the predator caused a brief panic among beachgoers as it was just a few yards away from the coast and swam dangerously close to one member of the public who filmed its movements.

The shark looked disorientated and circled the beach
(

The shark finally swam away but its presence sparked panic
(

After a period of swimming in circles in a likely state of disorientation, the shark eventually returned to deeper waters without an incident.

Witnesses claim they were joined at the shore by what looked like a blue shark measuring nearly 5ft long.

The strong swell around the coast of Spanish Balearic Island is thought to have washed it into the bay area on on the island's south coast.

Earlier this month The Mirror reported on how an eight-year-old boy survived a vicious shark bite requiring 30 stitches after punching his attacker on the nose.

The creature, believed to be a blue shark, was filmed by a member of the public
(

Napat Chaiyarak Christenko was playing in the ocean on Kamala beach in Phuket, Thailand when he was attacked by a shark.

The youngster screamed in pain before trying to kick away the creature before thumping it on the head, he later told police officers.

Onlookers watched Napat's terrified parents drag him up from the water as blood gushed from the wound on his right calf, where he was treated by lifeguards then paramedics at the scene.

He was then rushed to the Bangkok Hospital Phuket, where he told doctors it was the most painful thing he had ever felt.

It was reported that the Napat – who may have been mistaken for a fish by his predator – was accompanied by his parents at the time of the incident.

The boy told rescue workers that he had spotted the shark approaching in murky water, and that he retaliated by punching the shark after it bit him.

This, he says, appeared to cause the shark to swim away from the shore.