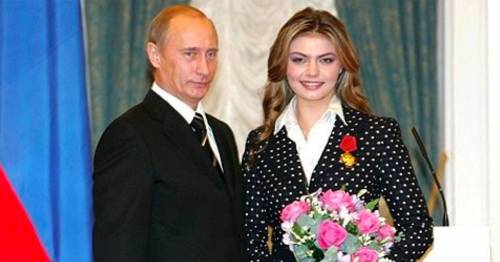 The Russian President, 69, is believed to have fathered at least two sons with former Olympic rhythmic gymnast Alina Kabaeva.

Putin could now have another baby on the way after reportedly discovering his 38-year-old mistress is expecting, the Daily Star reports.

Sources told The Sun that the despot was raging when the news broke as he was preparing for Russia's Victory Day parade in Red Square, Moscow.

Russian news channel General SVR Telegram reported the news yesterday, saying: “Putin found out his mistress is yet again pregnant and by the looks of it this wasn’t planned.”

“Who’s the daddy?” joked one commenter on the news outlet's website.

According to The Sun, sources said Putin was raging when the news broke as he was busy preparing for the Red Square’s Victory Day parade on Sunday (May 8).

Divorced Putin was said to be "subdued and withdrawn" after hearing the 38-year-old Olympian was pregnant again, particularly fearful that the news would tarnish the military parade amid his ongoing invasion of Ukraine.

Kabaeva, dubbed Russia’s most flexible woman, was previously reported to be hiding in Switzerland with their children.

Local news outlets report she had one son there in 2015 and another in Moscow in 2019.

Page Six reported in March that Kabaeva is "hiding in Switzerland with their four young children" which includes seven-year-old twin daughters.

Now she has appeared in public again, posing alongside gymnasts with a "ring" finger on her right hand is visible, the finger the band is worn in Russia.

The Russian President – who is rumoured to be struggling with both cancer and Parkinson's disease – has never publicly admitted to having a sexual relationship with Kabaeva although the pair have been pictured together.

Kabaeva won bronze in all-around gymnastics at the 2000 Olympic Games in Sydney and gold in the same category at the 2004 Athens games.

She has rarely been seen in public since rumours of their relationship began to circulate.

A 2021 statement from Kabaeva came two years after she was last seen in public, with a source close to the former gymnast saying regarding links to Putin: "We do not comment on the rumours."

Putin has previously said: "I have a private life in which I do not permit interference. It must be respected."

Previous : Ukrainian refugee, 9, so traumatised by war she couldn’t speak for five weeks
Next : WHSmith worker wins £25,000 after boss said she must bring her daughter into work