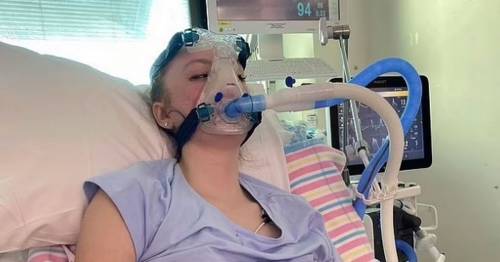 A 15-year-old schoolgirl was hospitalised with a life-threatening rare lung condition after taking up vaping – ultimately ending up in an intensive care unit struggling to breathe.

Dakota Stephenson, from Sydney, Australia, initially went into hospital with a high temperature and back pain but was diagnosed with hypoxia, an illness that means her lungs were not getting enough air.

She was rushed into intensive care at the Children's Hospital at Randwick, where she almost drowned because of fluid filling her lungs.

She was put on partial ventilation for three days to try and help her breathing, according to ABC News.

Just seven months before being hospitalised and left fighting for her life, Dakota took up vaping with her friends from school – something which doctors believed may have caused her illness.

The schoolgirl almost drowned because of fluid filling her lungs.
(

Speaking to the Daily Mail, her mother Natasha Stephenson said doctors used a "dozen syringes" to remove 250ml of fluid from her lungs that had been caused by vaping.

Ms Stephenson had only found out about her daughter's habit when she was admitted to hospital.

She said: "She (Dakota) would ask for $5 to buy snacks or go to McDonald's after school, but little did we know she was saving that money up to buy nicotine cartridges.

Her mother Natasha Stephenson said doctors used a "dozen syringes" to remove 250ml of fluid from her lungs that had been caused by vaping.
(

Dakota, left, had been secretly vaping for seven months at school
(

"The guy she was buying them off would get them in with different flavours like grape, strawberry and watermelon.

"It's basically a menu for kids."

Doctors believe she is suffering from a relatively newly diagnosed condition called EVALI, which was first brought to light following a US patient in 2019.

The condition is thought to have been caused by vapes that contain tetrahydrocannabinol (THC) and vitamin E acetate.

Following Dakota's illness, Ms Stephenson is calling for a ban on e-cigarettes and for the Australian government to get tougher.

Eli Dabscheck, a respiratory physician at The Alfred Hospital in Melbourne, said the case report clearly met the US Centre for Disease Control (CDC) definition of EVALI but was "highly unusual".

Speaking to ABC News, he mentioned Dakota was the only known case in Australia.

Although most cases of EVALI occurred from substances including THC, it is believed that Dakota had never used the substance during her time vaping.

Dr Dabscheck said: "I don't think we will ever be 100% certain what the cause was.''

He added: "There are definitely risks from nicotine in terms of cardiac toxicity. It's definitely not something I would want my children doing."