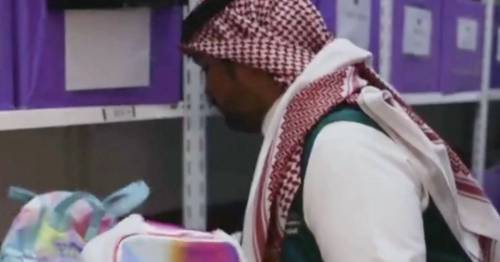 Rainbow-theme children's toys have been seized from shops by authorities in Saudi Arabia who are claiming the colours encourage homosexuality.

Commerce ministry officials have been visiting shopping centres in the capital Riyadh to confiscate items such as toys, hair clips, beauty items, clothes, hats, notebooks, pencil cases, and other trinkets.

State TV channel Al-Ekhbariya showed two officials walking around shops to inspect the goods before putting the brightly-coloured items in a pile on the floor.

One official told the channel that the rainbow-coloured items “promote homosexual colours” and are “targeting the younger generation”.

However, the ministry did not specifically say this was why they were seized. In a tweet, they said they were taken because they “contain symbols and signs that call for deviation and contradict common sense”.

They confirmed that any shops found selling the items would face legal penalties.

The country is often criticised for its human rights record and while there are no laws on sexual orientation and gender identity, sexual relations outside marriage, including homosexuality, can lead to a death sentence.

“We are giving a tour of the items that contradict the Islamic faith and public morals and promote homosexual colours targeting the younger generation,” an official from the commerce ministry said in a report.

They claim that the colours encourage homosexuality

Saudi Arabia previously banned films with references to homosexuality and in April, it had asked Disney to cut “LGBTQ references” from the Marvel film Doctor Strange in the Multiverse of Madness.

Discriminating against sexuality is not new in Saudi Arabia and in its annual report on human rights, the US State Department noted “reports of official and societal discrimination, physical violence, and harassment based on sexual orientation or gender identity in employment, housing, access to education, and health care” in Saudi Arabia.

In another Middle Eastern nation, Syria, the Directorate of Internal Trade and Consumer Protection said it had confiscated about 600 children’s rainbow kites that “indicate sexual homosexuality."

They said in a post on Facebook that the toys were similar to the Pride flag and that there had also been violations made by butchers and bakeries.

Previous : ‘My son was robbed of his life just after turning 18 due to ambulance delays’
Next : Police walked past septic tank where body of ‘murdered’ wife was found 37 years later