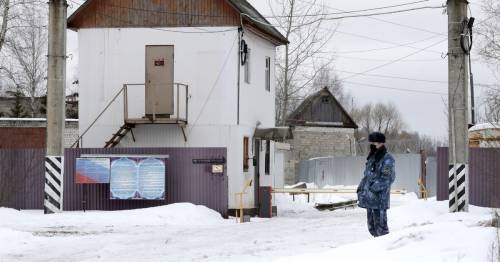 Perhaps the kindest description of Russia's infamous IK-2 prison colony is that it's a "friendly concentration camp".

The damning words came from Alexei Navalny, who became the institution's most high profile prisoner after being jailed for two and a half years back in Ferbuary.

Rising to fame as Vladimir Putin's biggest and most outspoken political opponent, the 45-year-old last year fell ill on a flight to Moscow and was rushed to hospital in Germany.

After fighting for his life, the opposition leader claimed he had been poisoned by Russian spies with the nerve agent Novichok, before returning to the country and controversially being arrested for violating the terms of his probation – despite having been in a coma.

Losing complete control of one leg due to the poisoning, he was refused medical treatment and went on hunger strike for 24 days.

However, sympathy is in short supply in the ruthless jail, where guards allegedly set upon prisoners with wooden hammers and specialise in the "sophisticated humiliation of human dignity".

Lags 'forced to make and unmake beds in pointless tasks'

A former Soviet-era facility used to 'cure' alcoholics and drug addicts through forced labour, IK-2 opened in 1996 and can house nearly 800 prisoners at a time.

Located in Russia's Vladimir region, it welcomed Navalny in February, who compared the scenes to George Orwell's novel 1984.

"Video cameras are everywhere, everyone is watched and at the slightest violation they make a report," he said in an Instagram message to followers.

"I think someone upstairs read Orwell's Nineteen Eighty-Four and said: 'Yeah, cool. Let's do this. Education through dehumanization.

“I haven’t yet seen any violence or even a hint of it, although by the tense posture of the convicts, standing at attention and afraid to turn their heads, I easily believe the numerous stories that here, in IK-2 Pokrov, people were beaten half to death with wooden hammers just recently."

He added: “That’s what I call my new home ‘our friendly concentration camp."

Inmates regard the prison as a 'Red Zone' institution where every minute of their daily lives is controlled, according to Reuters.

Tasking lags with pointless, repetitive chores like making and unmaking beds throughout the day, the punishing schedules are designed to break spirits.

Konstantin Kotov, an opposition political activist who spent 18 months in the jail, tells the documentary of the military-like rituals inmates were forced to endure during the harsh Russian winters.

"Typically you get up at 6am," says Kotov. "You go outside and everyone listens to the national anthem.

"You have to stand still with your hands behind your back. You can't turn your head or talk to anyone.

The roll call can take an hour or more. So you stand still for an hour in the cold or the heat. This is physically really hard."

Former staff and prisoners have revealed shocking incidents of violence, sexual assault and psychological abuse at the prison.

“Except the enemy is within, and they are destroying the prisoner as the enemy,” Akir Mirzoyev, who worked for Russia’s federal penitentiary system from 2002 to 2013, told Reuters.

“They are crushing the prisoner as an individual and calling it the betterment of a person. That is the main aim."

However, the most savage violence is dished out by groups of 'aktivisti' – inmates who work with prison authorities in exchange for privileges like better food and conjugal visits.

Punishing petty criminals with blows to their vital organs, while avoiding areas like the face that show bruising, the aktivisti are also responsible for ensuring inmates shave every day.

Despite some prisoners having AIDS or tuberculosis, these shaves are performed in a hurry using an old razor from a communal bag which leaves many with cuts, a former inmate told Reuters.

The news agency revealed how aside from physical punishment, psychological torture was also used to crush prisoners' spirits.

Kotov explained that during his detention he was treated as an outcast even by fellow lags – who were forbidden from speaking to him.

"They can ban other convicts from speaking to you, like they did with me," he said.

"No one spoke to me for most of my time in custody.”

Navalny has compared the prison to George Orwell's 1984
(

Radu Pelin, a builder who began his sentence in 2019, said aktivisti take note of any conversations with a black-listed prisoner in a notebook – and will take those who break the rules "away for a beating".

“The psyche of a person collapses when they’re in jail for half a year, a year or two years – and they don’t speak to anyone,” he added.

While former inmates have speculated that Navalny's 'celebrity' status may spare him the harshest treatment, his stay inside IK-2 has nonetheless proved eventful.

He was sentenced after a court ruled he had broken the terms of a suspended jail term, even though he had been in a coma – prompting an outcry from supporters and the West.

Since being incarcerated, Navalny has complained of numbness and back pain, insisting he has not been given proper treatment by prison doctors.

"I am losing feeling in areas of my arms and legs, and I want to understand what it is and how to treat it," he said, before embarking on a 24-day hunger strike in April.

In the new documentary, Christo Grozev, lead Russia investigator at Bellingcat, who first linked the attack on Navalny to state-hired agents, suggests his treatment at the prison could utimately prove "fatal".

"What we see now is that he is in jail with a seriously deteriorating medical condition," says Grozev.

"Some of the symptoms we see are neurological symptoms. He doesn't feel his right leg, he cannot control the muscles in his right leg.

"But because the Russian authorities refuse to recognise he was poisoned in the first place, doctors are not even allowed to take that previous poisoning into account when they are diagnosing what is wrong with him now.

"This itself is criminal – and can be fatal."

The Man Putin Couldn't Kill airs tonight on Channel 4 at 10pm. Got a story? Get in touch by emailing alex.bellotti@reachplc.com

Previous : Woman who quit her job to study ‘black magic’ found dead with baby in ‘ritual killing’ – World News
Next : Sweden to ramp up vaccination efforts as jab drive slows