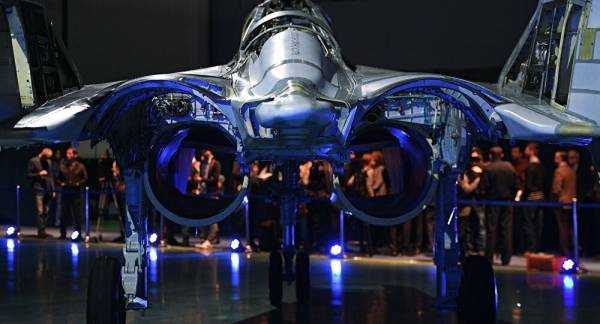 MOSCOW (Sputnik) – Russia’s next-generation fighter jet, the MiG-35 will be equipped with a new expert system capable of providing pilots with recommendations in various difficult situations, Dmitry Selivanov, a test pilot at the MiG aircraft corporation (part of Rostec), has said in an interview with Sputnik.

The fighter is already equipped with a voice assistant, the test pilot added.

©
Sputnik / Ramil SitdikovYoung ladies stand near a MiG-35 multipurpose fighter jet at the MAKS-2019 international aviation and space show in Zhukovsky outside Moscow.

No abnormal situations have been recorded during MiG-35 tests the pilot went on to say.

The MiG-35 is a 4++ generation aircraft, designed to destroy air targets day and night, regardless of weather conditions, as well as engage moving and fixed ground targets. Its main features include radar visibility, a quad-redundant fly-by-wire flight control system, and advanced avionics (cutting-edge radar and optical systems, as well as a helmet-mounted targeting system).

Previous : Norwegian Princess Kneels for Her ‘Black Brothers and Sisters’ Amid BLM Protests
Next : ‘Chinese Have Walked in and Taken our Territory in Ladakh’: India’s Main Opposition Party Congress