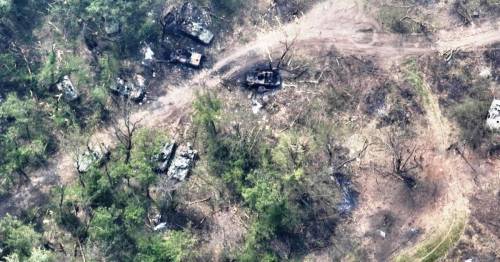 New satellite images have shown a tomb of Russian armoured vehicles lying destroyed near the River Donets in Ukraine and it's believed all the tanks were obliterated in the same battle.

According to reports the doomed unit made up of around 52 tanks was trying to cross the river to fortify Russia's position near Bilohorivka, west of Lysychansk.

Russian forces have redeployed to the south and east of Ukraine in a desperate attempt to turn the tide of the war following set back after set back.

An aerial view of burnt vehicles and the remains of what appears to be a makeshift bridge across the Siverskyi Donets River, eastern Ukraine
(

The photos also show a destroyed pontoon bridge that it's thought was targeted by Ukrainian defenders as a means to trap the armoured convoy in a crossfire.

The staunch resistance was praised by Ukrainian President Volodymyr Zelensky who has proclaimed that Putin's forces are being "pushed away".

He tweeted: "The occupiers are gradually being pushed away "I am grateful to all our defenders who are holding the line and demonstrating truly superhuman strength to drive out the army of invaders."

According to a Twitter user, Maxim, who claims to be a Ukrainian military engineer, the exact spot Russia was most likely to cross on May 7 was identified and troops ordered to be on the look-out for sounds of tugboat engines pushing a pontoon bridge.

On May 8, Russian troops tried to cover their advance by burning nearby fields and letting off smoke grenades, the military engineer said.

Drones were used to spot the battalion before a devastating artillery strike ordered in.

"Roughly 20 minutes after recon unit confirmed the Russian bridge was being mounted, heavy artillery engaged against Russian forces, and then aviation chipped in as well," Maxim said.

"I was still in the area, and I have never seen or heard such heavy combat in my life.

"After one day of combat, 9th May morning the bridge was down.

"Some Russian forces – roughly 30 to 50 vehicles and infantry – were stuck on the Ukrainian side of the river with no way back.

"They tried to run away using the broken bridge. Then they tried to arrange a new bridge.

"Aviation started heavy bombing of the area and it destroyed all the remains of Russians there, and the other bridge they tried to make.

"Rumors say it's 1,500 Russian dead. Their strategic objective was to cross the river and then encircle Lysychansk. They miserably failed."

According to Forbes, the attack destroyed more than 50 vehicles and up to 1000 Russian soldiers.

According to reports, the Russian forces were trying to ford the river when the Ukrainian's struck
(

On Wednesday evening, Ukraine's general staff said its forces had captured Pytomnyk, a village on the main highway north of Kharkiv, about halfway to the Russian border. The governor of the Russian region on the other side, Belgorod, said a village had been shelled from Ukraine, wounding one person.

Ukrainian forces seemed to be in control of Rubizhne, on the banks of the Donets river. "It is burned out, just like all Russian tanks," a Ukrainian soldier told Reuters near Rubizhne next to the ruins of one Russian tank. "The weapons are helping a lot, the anti-tank ones."

Kyiv has so far confirmed few details about its advance through the Kharkiv region.

"We are having successes in the Kharkiv direction, where we are steadily pushing back the enemy and liberating population centres," Brigadier General Oleksiy Hromov, Deputy Chief of the Main Operations Directorate of Ukraine's General Staff, told a
briefing, providing no specifics.