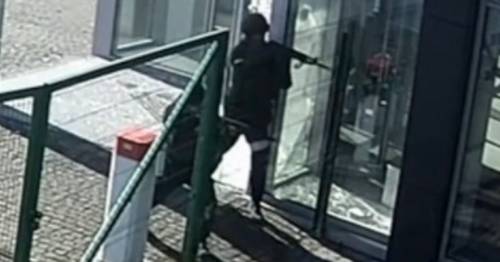 The killing of two unarmed men by Russian soldiers in Ukraine was captured on CCTV footage in one of the clearest examples yet of war crimes by Vladimir Putin's regime.

Security guard Leonid Pliats and his boss were shot in the back as they walked away from Russian soldiers they had been speaking with and now the killings are being investigated by Ukrainian prosecutors as a suspected war crime.

Video footage obtained by the BBC captured the terrible detail as two Ukrainian men were shot.

Using recordings from multiple CCTV cameras and after speaking to people Leonid phoned on that day and the Ukrainian volunteer fighters who tried to rescue him, the BBC reports that the Russian soldiers sped up to the scene in a stolen van.

Russian soldiers approached the scene in a stolen van
(

Footage shows it displays the 'V' sign used by Russian forces, along with the words Tank Spetsnaz.

The men are wearing a Russian military uniform as they approach the shop with guns out and their fingers on the triggers.

Leonid tries to show the soldiers he is unarmed and poses no threat by walking towards them with his hands up.

Initially the scene is calm. The Russian soldiers talk to Leonid and his boss through a fence, some even smoking.

The two shop workers then turn away and the Russian soldiers go to leave.

But suddenly the soldiers swerve back around and shoot the two Ukrainians multiple times while their backs are turned.

His boss is killed straight away, but Leonid manages to get into the cabin where he can call for help, after tying his belt around his thigh to stop the blood flow.

Leonid spoke to his friend Vasyl Podlevskyi twice on the phone as he lay bleeding.

Vasyl remembers his friend speaking about how the Russians claim they don't kill civilians, and yet they shot him.

"I said can you at least bandage yourself up? And he told me, Vasya, I barely crawled here. Everything hurts so much. I feel really bad," Vasyl told the BBC.

"So I told him to hang in there and started phoning the territorial defence."

While Leonid was bleeding, the Russians remained on site, shooting to get into rooms then stealing items like bikes and a scooter.

Footage shows them looking through papers in the director's office and drinking his whisky.

Vasyl phoned volunteer fighters Sasha and Kostya, who used to sell air conditioning before the war with Russia broke out.

Knowing they were outnumbered by the heavily armed Russian soldiers, they were forced to wait to help Leonid.

Sasha said they did their best to comfort him on the phone as he lay dying.

The killings are now being investigated for war crimes
(

They kept telling him they were on their way and Sasha hopes it helped the severely injured man. Sadly by the time they reached him, he had already died.

The two volunteer fighters still had to take cover from a Russian tank as they pulled the two men's bodies out.

The BBC reports there is "ample evidence against the men for these killings" having studied the footage.

One of the killer's faces is uncovered and visible in the video.

The bodies of 37 civilians were discovered, having been shot, on the road into Kyiv after Russian forces were pushed back.

With more than 10,000 registered cases, the Prosecutor's office is now looking into the killing of Leonid and his boss as yet another possible war crime.

Speaking to the BBC after his death, Leonid's daughter Yulia Androshchuk said:"My Dad was not a military man at all. He was a pensioner. They killed a 65-year-old. What for?"

She is currently abroad and has not even been able to say goodbye to and bury her father yet.

Yulia said she is "full of grief – and fear" in the aftermath of her dad's death, and says she is "afraid" of what the Russians will do next.

Previous : Teenagers found guilty of battering care worker within an inch of his life
Next : Psychedelic neon home for sale at £355,000 baffles house hunters with what’s inside