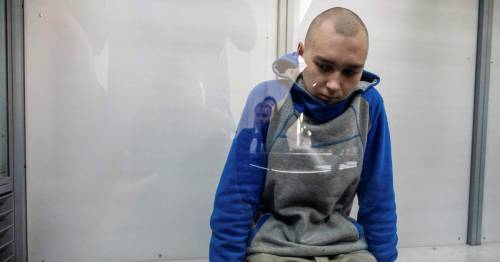 A Russian tank commander accused of killing a Ukrainian civilian has gone on trial in the first for alleged war crimes committed during the invasion.

The Ukrainian court held a preliminary hearing on Friday after charging a 21-year-old soldier with the murder of a 62-year-old civilian.

During the short hearing, the defendant said his name was Vadim Shishimarin and confirmed that he was a Russian serviceman.

Shishimarin was accused of "violations of the laws and norms of war".

The defendant did not enter a plea at today's hearing and will do so at a later date, his lawyer Viktor Ovsyannikov said.

Shishimarin wore a casual blue and grey hoodie and was led into the courtroom by police to a glass booth for defendants.

Shishimarin, 21, is seen inside a defendant's cage during a court hearing
(

The Ukrainian prosecutor told the court the defendant was a tank commander in the Kantemirovskaya tank division from the Moscow region.

If convicted he faces up to life imprisonment over the killing in a village in the east of Kyiv on February 28.

Shishimarin is alleged to have stolen a privately-owned car to escape with four other Russian servicemen after their column was targeted by Ukrainian forces.

The Russian soldiers then drove into a village where they saw an unarmed man riding a bicycle and talking on his phone, the court heard.

Shishimarin was allegedly told to kill the civilian to prevent him from reporting on the Russians' presence and is accused of firing several shots through the open window of the car with an assault rifle at the civilian's head, and he died on the spot.

Shishimarin was led into the courtroom by police
(

The SBU Security Service of Ukraine conducted the investigation into the case, it said.

State prosecutor Andriy Synyuk told reporters after the hearing: "This is the first case today. But soon there will be a lot of these cases."

It comes as the Ukrainian government has accused the Russian military of carrying out horrific crimes against its citizens including rape and murder.

It says it has identified more than 10,000 possible war crimes.

Russia denies targeting civilians or involvement in war crimes and the Kremlin told reporters on Friday that it had no information about a war crimes trial.

Michelle Bachelet, the U.N. High Commissioner for Human Rights, said yesterday there were many examples of possible
war crimes since the Russian invasion and that 1,000 bodies had been recovered so far in the Kyiv region.

Last month, the International Criminal Court (ICC) said on April 25 that it would take part in a joint team with Ukrainian, Polish and
Lithuanian prosecutors investigating war crimes allegations against Russian forces.

The court will reconvene on May 18, the judge said.

Previous : Man left disabled after being thrown from horse spooked by dog sues owner for £5million
Next : Couple return to hotel room to find wild monkeys have taken over the jacuzzi – World News