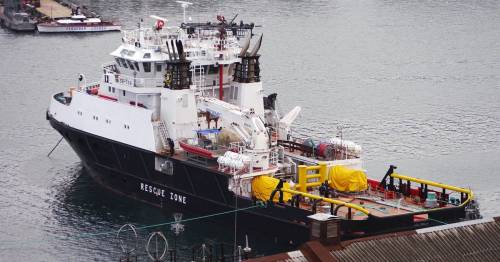 A Russian tugboat delivering soldiers and weapons to Snake Island has been hit with Ukrainian missiles with ten 'presumed dead', it has been claimed.

Kyiv claims it struck the navy vessel in the Black Sea with two Harpoon missiles.

It is the first time Ukraine's armed forces are said to have hit a Russian ship with the Western-supplied rockets.

Ukrainian sources later claimed ten sailors on the tug were missing presumed dead, and 23 wounded.The crew number was put at 33. Russia has not commented on the claims that the vessel was hit.

The vessel Vasyl Bekh was struck at 4am while transporting soldiers, weapons and ammunition to the island.

The tugboat was reportedly delivering soldiers and weapons to Snake Island
(

However there was also speculation that either a British-supplied Brimstone missile or a ship-based missile defence system was used.

Ukraine's Armed Forces Strategic Communications Directorate published the information on the Telegram app, alongside a video showing an apparent strike from the air.

The tug evidently remained afloat and was being evacuated for repairs after sustaining significant damage.

The strike was initially claimed by Maxim Marchenko, head of the Odessa-based regional war administration.

The Vasyl Bekh has served in the Russian Black Sea Fleet since 2017.

In February, Ukrainian border guard Roman Hrybov on Snake Island famously radioed “Russian warship, go f*** yourself” to the threatening missile cruiser Moskva, which was later sunk by the Ukrainians.

The strike was initially claimed by Maxim Marchenko
(

In an attack today by Russia on strategic Ukrainian city Mykolaiv, Russian missiles are seen hitting “residential buildings and infrastructure”.

One person was killed and six wounded, including a child, said reports.

It comes after it was claimed Russian Vladimir Putin's refusal of criticism over his tactics in the war echo the downfall of fellow warmonger Adolf Hitler.

Hitler died in a bunker in 1945 after refusing to give in when Nazi Germany started losing the war – a culmination of poor tactical decisions and not listening to his advisers.

Now Professor Angus Dalgleish, of St George's, University of London told The Mirror that this is typical of a mad dictator and he believes "the end days of Hitler were incredibly similar".

He continues: "It is the refusal for criticism and the above all feeling that you are right and everyone else is completely wrong.

"Had Hitler listened to the advice of his generals and advisers, he wouldn't have made so many dreadful mistakes which led to losing the war."

Previous : Woman, 21, hits back at sick trolls who branded her boyfriend, 52, a paedophile – World News
Next : Couple issued with noise warning about loud sex sessions as neighbours complain