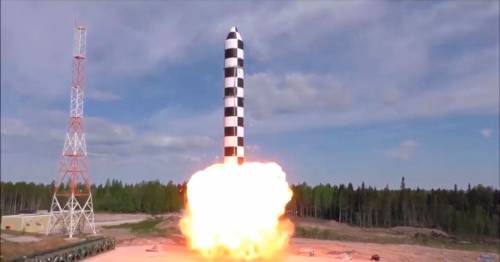 Russia is capable of destroying Nato countries in just 30 minutes, one of Vladimir Putin 's cronies has claimed.

He claimed Nato was the one "waging war" and it was "obvious to everyone".

The 58-year-old said: "NATO is waging a war against us. They didn't announce it, but that doesn't change anything. Now it's obvious to everyone.”

He added: “In a nuclear war, NATO countries will be destroyed by us in half an hour.

“But we must not allow it, because the consequences of the exchange of nuclear strikes will affect the state of our Earth.

Dmitry Rogozin claimed Nato was the one 'waging war'
(

“Therefore, we will have to defeat this economically and militarily more powerful enemy with conventional armed means.”

Rogozin also suggested that his boss would put Russia on a war footing amid speculation that mass mobilisation is on the cards to bolster his flagging war effort.

He said: "Such a victory is possible with the full solidarity of the whole country with the army, the mobilisation of the state economy.”

Industry must be immediately forced to serve military objectives, he said.

He said: "This must be done immediately and quickly."

Rogozin describes the invasion as a "war", despite the Kremlin referring to it as a "special military operation".

He said: "This is a war for the truth – and the right of Russia to exist as a single and independent state.”

Rogozin continued: “The very existence of a Ukraine separate from Russia will inevitably turn it into anti-Russia and a springboard of the West for aggression against our people.

“That is why what we call a Special Military Operation goes far beyond its original meaning and geography.”

A test launch for Russia's intercontinental Sarmat missile in 2018
(

He claimed Nato was engaged in a proxy war using Ukrainian soldiers to fight without putting their own forces in harm's way.

“The armed forces of Ukraine are expendable cannon fodder for Nato,” he said.

“They are only operators trained by Nato instructors who push the levers and buttons of Nato weapons.”

But he also contradicted Putin by saying “we are not fighting the Nazis in Ukraine”.

He said: "We are liberating Ukraine from Nato occupation and pushing the worst enemy away from our western borders.”

It follows calls from a Russian reporter for Putin to unleash his nuclear weapons.

Alexander Sladkov, a "propagandist" for the Kremlin, advocated for an atomic bombing to cause “a crater the size of several regions”.

Putin says his "special military operation" has been to "liberate" it from the "Neo-Nazis". Russia has tied itself in knots trying to support this argument for war.

Sladkov told his 730,000 followers time may be approaching for the “last resort” because some 40 countries are arming Ukraine with weapons that are being used against the Russians.

Previous : Britain’s street of horrors avoided by cab drivers where ‘someone’s leg was chopped off’
Next : Secret tiny house hidden in tunnel under Liverpool ‘extremely dangerous’ to get inside