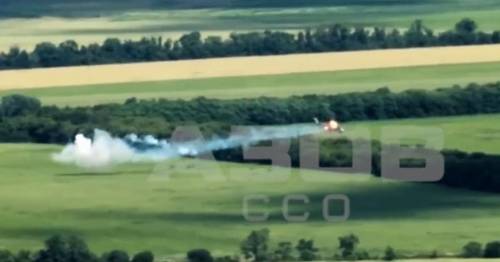 This is the moment a low-flying Russian helicopter bursts into a ball of flames after being struck by a Ukrainian missile.

It crashed into a field after the direct hit, understood to have taken place in Donetsk.

The aircraft is reportedly a Mi-35M attack helicopter and it was attacked by a man-portable air defence system after flying very close to the ground.

Dramatic drone footage captures the moment the aircraft is blasted by enemy troops.

A short clip was shared widely on social media, but there has been no details about when the missile struck or the number of deaths.

The chopper can be seen suddenly bursting into flames after apparently being struck in the engine exhaust area.

The video was located to an area just inside the region of Donetsk, on the border with Zaporizhzhia.

Posting on the messaging app Telegram, the Azov SSO said: "Original footage of the Russian Mi-24 helicopter in the Zaporizhzhia region.

"Aimed shot by a missile from the Stinger MANPADS was fired by an SSO Avoz fighter under the pseudonym Betsyk.

It burst into flames after the direct hit
(

"The burning helicopter of the occupiers made an 'unplanned' landing right in the middle of the Ukrainian field.

"Now it is his permanent location."

It is the latest direct hit reported by Ukraine as the deadly war continues to rage.

A Russian tugboat delivering soldiers and weapons to Snake Island was hit by Ukrainian missiles with ten people presumed dead.

It then crashes into a field, creating a huge fireball
(

Kyiv claims it struck the navy vessel in the Black Sea with two Harpoon missiles.

It is the first time Ukraine's armed forces are said to have hit a Russian ship with the Western-supplied rockets.

Ukrainian sources later claimed ten sailors on the tug were missing presumed dead, and 23 wounded.The crew number was put at 33. Russia has not commented on the claims that the vessel was hit.

The vessel Vasyl Bekh was struck at 4am while transporting soldiers, weapons and ammunition to the island.

There has been no confirmation of the number of casualties
(

Ukraine's Armed Forces Strategic Communications Directorate published the information on the Telegram app, alongside a video showing an apparent strike from the air.

In February, Ukrainian border guard Roman Hrybov on Snake Island famously radioed “Russian warship, go f*** yourself” to the threatening missile cruiser Moskva, which was later sunk by the Ukrainians.

The latest strike comes as it was claimed Russian Vladimir Putin's refusal of criticism over his tactics in the war echo the downfall of fellow warmonger Adolf Hitler.

Professor Angus Dalgleish, of St George's, University of London told The Mirror that this is typical of a mad dictator and he believes "the end days of Hitler were incredibly similar".

He continues: "It is the refusal for criticism and the above all feeling that you are right and everyone else is completely wrong.

"Had Hitler listened to the advice of his generals and advisers, he wouldn't have made so many dreadful mistakes which led to losing the war."

Previous : Frankie Dettori rides Inspiral to stunning Royal Ascot 2022 triumph in Coronation Stakes
Next : Commuter ‘dragged to his death when his foot got trapped in train door’