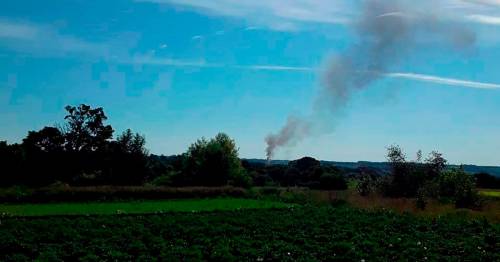 A Russian fighter jet has crashed in a burning wreck close to the Ukrainian border.

A video shows the burned wreckage of the fighter in Russia's Belgorod region which shares frontiers with the Luhansk, Kharkiv and Sumy regions of Ukraine.

The cause of the crash was not immediately clear amid suspicions it could have been shot down and the crash site is some 32 miles from the Ukrainian border.

The pilot safely ejected, according to Russian reports, which denied it was hit by Ukraine.

The Russian Western military district said the Su-25 was on a training flight rather than a combat mission and suggested a “technical malfunction” as a possible cause.

There were also claims that it hit low power cables.

However, Readovka media outlet claimed that there are no electricity pylons in the vicinity.

An eyewitness saw two warplanes had been flying and then there was suddenly a column of smoke.

The second plane flew around the crash site.

“A Su-25 crashed in the Belgorod region today during a planned training flight,” said the Russian military statement.

“The pilot ejected and was evacuated to the base airfield. There is no threat to the health of the pilot. The plane crashed in a deserted place. There was no destruction on the ground.

“According to preliminary information, a technical malfunction could be the cause of the accident."

The pilot safely ejected, according to Russian reports, which denied it was hit by Ukraine
(

Previous : Gran told she’d won £3.5m house in £10 raffle thought it was a hoax and went to pub
Next : Labour celebrates 100 years of Welsh wins – and here’s how the party did it