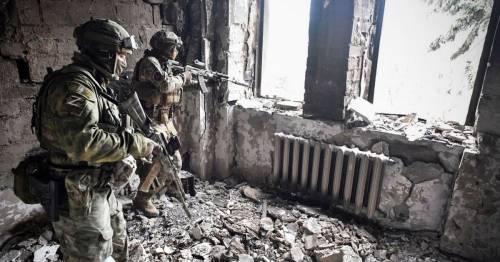 A top commander in Vladimir Putin's military has described the failed invasion as "bleak", according to his Telegram channel.

Putin's war in Ukraine has dragged on for more than 10 weeks as the Kremlin boss struggles to capture any major city and has suffered serious losses to his military.

Russian intelligence officer and commander Igor Girkin described the invasion as "bleak" while warning the war will last "possibly many months".

He wrote: "The conclusion, unfortunately, is bleak. In the best-case scenario, the enemy will be slowly ‘pushed out’ of the Donbas with large losses (for both sides, of course) across many weeks and possibly many months.”

However, some of Putin's cronies still believe he is capable of exerting force – further highlighting how the Kremlin leader's inner circle are at loggerheads with how this invasion is going.

He claimed Nato was the one "waging war" and it was "obvious to everyone".

The 58-year-old said: "NATO is waging a war against us. They didn't announce it, but that doesn't change anything. Now it's obvious to everyone.”

He added: “In a nuclear war, NATO countries will be destroyed by us in half an hour.

“But we must not allow it, because the consequences of the exchange of nuclear strikes will affect the state of our Earth.

“Therefore, we will have to defeat this economically and militarily more powerful enemy with conventional armed means.”

Rogozin also suggested that his boss would put Russia on a war footing amid speculation that mass mobilisation is on the cards to bolster his flagging war effort.

He said: "Such a victory is possible with the full solidarity of the whole country with the army, the mobilisation of the state economy.”

It comes as Putin's forces continue to press in the eastern part of Ukraine.

Yesterday Russian bombs killed two people hiding inside a school in Ukraine with up to 60 others feared dead.

Serhiy Gaidai, governor of the Luhansk region, said almost the whole village of Bilohorivka had been sheltering in the building.

Around 30 people were rescued from the rubble following the strike on Saturday afternoon.

However, 60 others are thought to have died under the debris..

Previous : They traveled across state lines to get abortions. Now they fear a post-Roe world
Next : Boris Johnson pledges £1.3 billion more to fund Ukraine’s fight against Russia