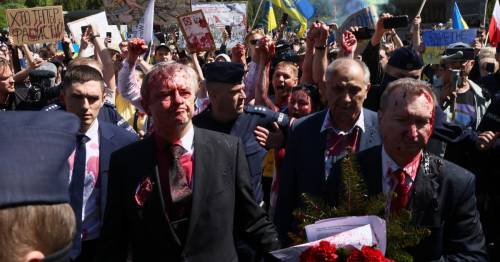 A Russian Ambassador was left covered in blood red paint and called a ‘fascist' as protesters left him humiliated during a visit to a memorial to mark Victory Day.

Sergey Andreyev, Russia's ambassador to Poland, was paying tribute to Soviet Union soldiers killed during World War II, when he was filmed dripping in paint.

Protesters screamed at him as anger over Russia's invasion of Ukraine boiled over.

Crowds were angrily chanting at Andreyev as his security guards, and reporters covering the event, were caught up in the paint attack.

The Russian Ambassador tried to wipe some of the paint out of his right eye as a woman placed some underwear on his shoulder, with security quickly removing the item of him.

Protestors could be seen holding Ukrainian flags as they chanted "fascists" at the ambassador.

The Russian ambassador was attempting to lay flowers at the memorial
(

Poland has been helping Ukraine by welcoming millions of refugees trying to flee the Russian invasion.

Meanwhile, Vladimir Putin said in his speech at he Victory Day parade in Moscow, troops are fighting for their country.

The Russian leader said his "special military operation" was a purely defensive and unavoidable measure against plans for a NATO-backed invasion of lands he said were historically Russia's, including Crimea.

On Monday night, heavy fighting was underway in eastern Ukraine on, according to Ukrainian officials, who have warned residents to take cover from expected missile strikes as Moscow marked the anniversary of the Soviet Union's victory over Nazi Germany.

According to the Ukrainian military, four high-precision Onyx missiles fired from the Russian-controlled Crimea peninsula struck the Odessa area in southern Ukraine.

Ukrainian Deputy Defence Minister Hanna Malyar said the Russian army is trying to advance in eastern Ukraine, where the situation was "difficult".