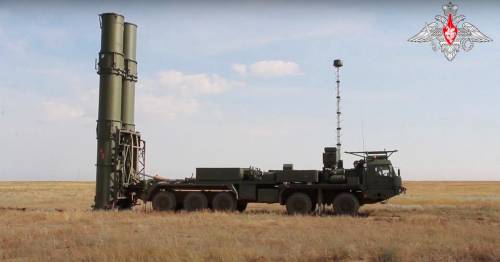 Russia’s new powerful S-500 which can destroy incoming hypersonic missiles is being delivered to armed forces and is ready for use, Vladimir Putin has said

It comes after Putin just days ago threatened former countries of the Soviet Union, Lithuania and Kazakhstan, of military action if they defied Russia.

Lithuania was rapidly becoming a flashpoint after it blocked goods sanctioned by the EU from reaching Russian exclave Kaliningrad.

Putin henchmen were also warning of the threat of war in Kazakhstan after Putin was “humiliated” by Kazakh leader Kassym-Jomart Tokayev when they shared a platform together at Russia’s major economic summit in St Petersburg.

In a speech to military graduates in Moscow on Tuesday, Putin spoke of plans to deploy the powerful S-500, which he said was already being delivered to Russia’s armed forces.

He said: "We will continue to develop and strengthen our armed forces, taking into account potential military threats and risks, and based on the lessons of modern armed conflicts, and improve their combat strength."

The Russian tyrant said the powerful S-500 is already being delivered to the Russian armed forces.

He continued: "Among the priority areas is equipping troops with new weapons systems that will determine the combat efficiency of the army and navy in the coming years and decades."

The ‘Prometheus’ – the S-500 surface-to-air defence system that can shoot down missiles in space – was presented to the world last year.

Major General Sergei Babakov, commander of Russian missile defence troops, said at the time: "The S-500 air defence system is capable of destroying hypersonic weapons of all modifications, including in near space, in addition to aerodynamic and ballistic targets, which makes it possible to say with confidence that this system is unique.”

It can engage enemy ballistic missiles at a range of up to 375 miles and aircraft at about 310 miles, said the Russians.

Putin also said the Sarmat intercontinental ballistic missile was set to be delivered to the army soon.

The Sarmat – also known as Satan 2 – could fly more than 11,000 miles, carry 15 warheads and had the potential to destroy an area the size of the United Kingdom in a single strike.

Over the weekend the Russian President’s men lashed out at ex-Soviet states that he perceived to have turned against the Kremlin.

Hostility was flaring up in Lithuania – a NATO state – after it blocked goods sanctioned by the EU from reaching Russian exclave Kaliningrad.

The system has the ability to stop nuclear weapons, it is claimed
(

Any direct Russian attack on alliance member state Lithuania would be seen as an act of war against NATO and could well trigger WW3.

Putin foe Mikhail Khodorkovsky warned in The Financial Times that the Kremlin leader’s “next step” would be an “air blockade of Lithuania.

Putin henchmen were also warning of the threat of war in Kazakhstan after Putin was “humiliated” by Kazakh leader Kassym-Jomart Tokayev when they shared a platform together on Friday at Russia’s major economic summit in St Petersburg.

Tokayev snubbed Putin by refusing to recognise the Donetsk and Luhansk people’s republics as independent states.

One account said Putin was “literally furious” and felt humiliated – with some saying he's ready for “revenge”.

Chechen leader Ramzan Kadyrov warned Kazakhstan: “You’ve got to stand with Russia and show your position, and not be scared of US and EU sanctions.”