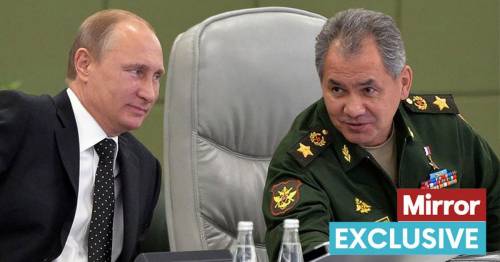 Russia’s defence chief Sergei Shoigu has escalated fears of a Ukraine invasion by ordering his commanders to make their nuclear forces “combat ready.”

It followed US warnings that Putin could order his tanks to roll into neighbouring Ukraine within weeks after months of military muscle-flexing against NATO.

Moscow’s forces are being equipped with deadly “flame-thrower” rockets capable for sending a ball of fire four miles ahead of troops to devastate defending forces.

On Wednesday Shoigu told Russian military leaders their top priority must now be: “Increasing their combat effectiveness, maintaining the combat readiness of nuclear forces and strengthening the potential of non-nuclear deterrent forces.”

He told them this was in retaliation for “growing NATO activity near the Russian borders,” in recent weeks, referring to claims US long-range bombers had buzzed the country’s borders.

And he warned Russia will react by equipping the military with “high precision weapons, effective means of destruction, modern weapons and equipment.”

It is believed Russia has put NATO and Ukraine commanders on a state of near-permanent high-alert regarding the possibility of an invasion deliberately.

This was to both lessen the impact of an actual invasion, as it has been long-expected, and also to induce a sense of repetition so he can take them by surprise when or if he issues the order to attack.

In 2014 his troops annexed Crimea in a lightning operation with barely a shot fired, having paved the way with anti-west propaganda for several years.

This meant locals were less angered and in many case openly towards the presence of Russian forces when they arrived.

Moscow’s forces are being equipped with deadly “flame-thrower” rockets
(

During daily fighting along the Ukraine border with Russia since 2014 around 13,000 people are thought to have been killed.

It is believed Russian forces are keen to push back the front line further into Ukraine to garner nationalist support back home and strike a decisive victory for local Moscow-backed separatists.

Another theory of Putin’s battle-plan is that he will risk all by sending troops in a pincer movement deep into Ukraine by rolling in from Crimea and Belarus.

One Russia analyst told the Daily Mirror: “The terrifying picture now emerging, is that in mid-winter mass Russian forces would invade Ukraine through Belarus in the north and up through Crimea in the south, heading towards the capital Kiev, an encirclement operation, splitting the country in two.”

The expert said the timing of mid-December for an attack would mean the numerous waterways in central Ukraine would be frozen over.

This would mean military bridges would not have to be erected and an advance could proceed at high speed.

By sealing a military deal with neighbouring Belarus Russian President Vladimir Putin has ensured his troops can access Ukraine via Belarus.

It is believed the Kremlin’s war in eastern Ukraine is costing Russia billions of pounds every year, whilst the Russian economy has tanked in the past year.

Western sanctions against Moscow have crippled its economy.

Previous : Tourist savagely attacked after mistaking crocodile for plastic model while taking selfie – World News
Next : Arbery’s mother: ‘He will now rest in peace’ after verdict