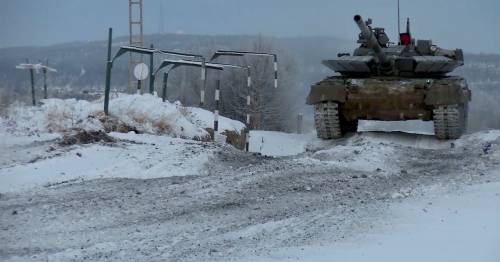 Russian troop numbers gathering at Ukraine’s borders have swelled to 126,000 despite Moscow’s claims it has no plans for an invasion, it has been revealed.

Tens of thousands more reinforcements could be rushed to the frontline within a fortnight if war breaks out, according to official Ukrainian intelligence assessments.

They are backed by tanks, artillery, armoured infantry fighting vehicles and as many as 30 assault and landing ships and boats primed for an amphibious attack.

And in the past year they have engaged in 2,500 military exercises close to Ukraine’s border – many mirroring plans for an invasion or partial incursion into Ukraine.

They are backed by tens of thousands of pro-Russian separatists and special forces and regular troops already in trenches along a 250 mile-long frontline in Donbas.

A source told the Daily Mirror: “They are continuing the build-up of forces and the assessment is that there are worrying signs of a preparation for an invasion..

“The Ukraine military is prepared and bracing for an attack and is in a far better position to defend itself than it was in 2014 during the forced annexation of Crimea.”

The latest official Ukrainian military assessment is that Moscow would be able to rush tens of thousands more troops to the frontline once an attack is underway.

It says: “Russia has also developed the capability to deploy more units in a short period of time of one or two weeks.

“In 2021 Russia conducted 2,500 military drills near the border with Ukraine, strengthening the readiness of its forces to be involved in new military operations on Ukrainian soil.”

Russia has carried out 2,500 military drills near the Ukrainian border recently
(

On the maritime assault force the Ukrainian document says: “Russia maintains 30 landing ships and boats as part of its Black Sea fleet to increase the strike and landing capabilities.”

Worryingly the Kremlin said on Tuesday it saw no reason to be optimistic after Monday's talks on Ukraine and wider European security with the US in Geneva.

Speaking to reporters on a conference call, Kremlin spokesperson Dmitry Peskov said it was too early to draw conclusions from the talks, which he said had been substantive, direct and open.

Washington has said it cannot accept these demands and western leaders have warned of severe sanctions if Russia attacks Ukraine.

Previous : Huge asteroid bigger than Big Ben to pass Earth today with even larger one due next week – World News
Next : BofA cuts Mexico 2022 GDP outlook to 1.5%