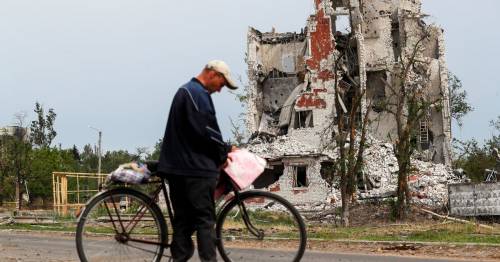 Russia is forcing everyone in the occupied regions of eastern Ukraine to pay 14,000 rubles (£200) to pay for the war, it has been reported.

Kira Yarmysh, Kremlin critic Alexei Navalny 's spokeswoman, announced on Twitter that Vitaly Khotsenko, the Prime Minister of the self-proclaimed republic, declared that 14,000 rubles (around £200) will be taken from everyone, including infants and the elderly.

The Kremlin has said they will invest more than two trillion rubles in the economy of the Donetsk People's Republic (DPR), within two years but it is unknown how the money will truly be spent.

Ukrainians living in the southeastern regions of Donetsk and Luhansk, known as the Donbas, have been controlled by Moscow-backed separatists for almost eight years.

But Russian President Vladimir Putin only recognised Donetsk and Luhansk as official republics three days before it invaded Ukraine, on February 21.

This was seen as the pretext for the warmonger to invade Ukraine.

All UN member states, apart from Russia, consider the DPR to still legally be a part of Ukraine and not an independent state.

However earlier this week, Syria became the first country to formally recognise the two parts of Ukraine as independent republics.

Russia is Syrian President Bashar Al-Assad's main ally and both countries have collectively committed a long list of war crimes and helped prop each other up through years of war.

Now for the first time, senior Russian government officials have been appointed as members of the DPR separatist administration, this confirms growing concerns that Russia could permanently occupy captured territories during the invasion.

Russia's original war goals of seizing major Ukrainian cities such as the capital Kyiv failed and so the fighting has now refocused and is most fierce in the Donetsk and Luhansk regions.

Ukraine is suffering about 1,000 military deaths and injuries a day in the Donbas region, a Ukrainian official said Wednesday.

According to public polls, over a third of Russians consider themselves to be poor and this has been exacerbated by the war.

There is now a huge economic squeeze and a large number of job losses in Russia which has risen as a result of sanctions imposed since the invasion of Ukraine.

A Ukrainian service member amid Russia's attack on Ukraine, near Bakhmut, Donbas region
(

The remittance-dependent communities in Central Asia are particularly feeling the impact, according to experts with the International Organization for Migration.

One Twitter user responded to the news, saying: “Russia itself does not need this money at all.”

Another said: “If they support the occupied territories, it will hardly improve the situation of the disadvantaged.”

Previous : Woman died after hospital fed her Weetabix as son’s ‘heart sank’ at tragic news
Next : Gran deported after going to disturbing lengths to cover up the murder of her son’s fiance – World News