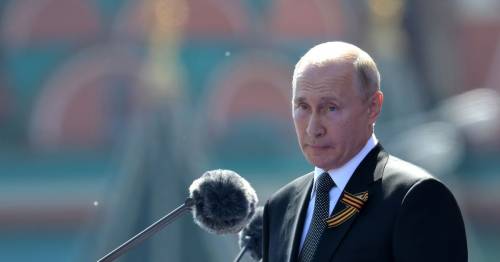 Vladimir Putin aborted the annual Victory Day flypast at the last minute because he feared a kamikaze or missile air strike on Red Square, an anti-Putin channel has claimed.

The 77-plane parade was cancelled yesterday over concerns enemies would 'target him' at his military event, one Russian outlet suggests.

The Kremlin may have pulled the plug on the show of airpower over sabotage fears, it has also been claimed although there is no evidence to support it.

Putin stood among officials and veterans close to Lenin’s Mausoleum presiding over the huge event but shortly before the mammoth annual parade, the flypast was abruptly cancelled.

Officials blamed poor weather for the decision – despite clear skies over Moscow.

The flypast was cancelled minutes before it was due to begin
(

Airshows were also cancelled or curtailed in at least ten other cities.

“We need to explain why the aerial part of the Victory Parade was cancelled,” reported General SVR Telegram channel, an anti-Putin Russian outlet that claims to have an insider source in the Kremlin.

“The reason in Moscow is simple. Russian president Vladimir Putin was afraid of a possible ‘strike from the air’.”

The report does not make clear whether it was claiming he feared sabotage by a kamikaze attack or a missile during the low flypast .

The SVR Telegram channel, an anti-Putin Russian outlet, says it was because Putin feared an attack
(

The post claimed Putin’s entourage was aware he was “paranoid” over the possibility of an attack amid the war in Ukraine.

The Moscow parade was cancelled for this reason, said the channel, which has made other baseless reports such as that Putin would soon need cancer surgery.

“In other regions the aerial part of the parade was axed…for ‘company’, so that the cancellation in Moscow would not cause undue attention.”

One of the planes scheduled to fly in Moscow was Putin’s Doomsday aircraft, an Il-80 designed for use by the Kremlin leader and his top military and security apparatchiks in the event of nuclear war.

The 77 planes – including strategic bombers – had rehearsed extensively for the show.

In previous years, if bad weather was an issue, Putin, 69, sent up a fleet of ‘weather-changing’ aircraft to spike the clouds with a chemical cocktail of silver iodide, liquid nitrogen and dry ice to ensure rain stayed away from Red Square and instead fell on villages outside Moscow.

But the An-26 planes were not deployed on Monday.

Russian analyst and investigative journalist Christo Grozev acknowledged the sabotage version and said in an interview: ‘We will soon find out.

“All these conspiracy theories…have the right to exist because this is a special year which attempts to sabotage Russian troops and power.

“It is logical during a war.

“That's why more paranoid measures were taken, although any hint that some pilot misbehaved yesterday, well, it could cause it all to be cancelled.”

There were also claims that Putun’s Doomsday plane had a “technical malfunction”, said Grozev, who is associated with British-based Bellingcat open source research group which has run investigations on Russian corruption.

“I am sure that we will most likely find out the [real] cause in the coming days.”

Kyiv sources today said the Russian cancellations were due to fears of strikes against the plans by hand-held Ukrainian missiles.

The ‘bad weather’ pretext was bogus, said a report by Ukrainian outlet UNIAN.

General SVR channel, first raised issues of Putin’s health – including abdominal cancer, Parkinson’s disease and a schizoaffective disorder – some 18 months ago, and now says the Russian president is due to face surgery soon.

Recently such reports of oncology and possible Parkinson’s have gained more credence but the Kremlin insists he is healthy.

The channel has been linked to Professor Valery Solovey, 61, who in February, was held for a seven hour interrogation apparently possibly linked to the regular claims about Putin’s supposed medical and mental condition .

Solovoy was a professor at Moscow State Institute of International Relations (MGIMO) – attended by future top diplomats and spies.