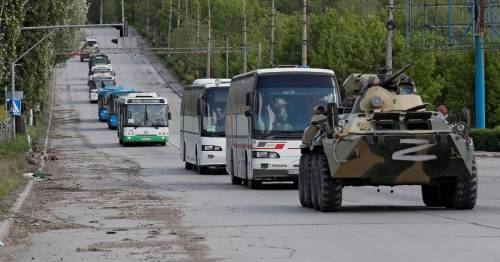 Ukrainian fighters who surrendered at the Azovstal steelworks may now be tried as “Nazi war criminals” after being told they would be freed in a prisoner exchange.

Russia is being accused of false promises after it agreed to exchange the Ukrainians still fighting in Mariupol if they gave up their resistance.

Members of the Azov Regiment had been stubbornly fighting on against Vladimir Putin ’s forces at the massive steelworks with a maze of tunnels that made it difficult for them to be defeated.

More than 250 Ukrainian soldiers surrendered after weeks of desperate resistance, bringing an end to the most devastating siege of Russia's war in Ukraine.

But now Russia’s Parliament has said it will vote on a resolution not to allow the “exchange of Nazi war criminals” and some MPs have called for them to be executed.

Russian authorities have said that the prisoners will now be interrogated
(

Vyacheslav Volodin, speaker of the Russian Parliament, said: “They are war criminals, and we must do everything to bring them to justice.”

The Russian MP Leonid Slutsky called for the troops to be executed.

He said: "They do not deserve to live after the monstrous crimes against humanity that they have committed and that are committed continuously against our prisoners."

Putin had personally guaranteed the prisoners would be treated according to international standards, and Ukrainian officials said they could be exchanged for Russian captives.

The Azovstal steelworks became the last stand by the Ukrainian fighters
(

TASS news agency said a Russian committee planned to question the soldiers, many of them members of the Azov Battalion, as part of an investigation into what Moscow calls "Ukrainian regime crimes".

With some fighters still in the Azovstal steelworks, any going back on the agreement would lead to a breakdown in further surrenders and prisoner exchanges.

Vladislav Davidzon, a Russia expert at the Atlantic Council think-tank, reportedly said: "A change to the law by Russian MPs could derail any prisoner swap. It shows just how underhand Putin and his cronies are in the dishonourable way they wage war."

The complete capture of Mariupol is Russia's biggest victory since it launched what it calls a "special military operation" on February 24.

But the port lies in ruins, and Ukraine believes tens of thousands of people were killed under months of Russian bombardment.

Russia said at least 256 Ukrainian fighters had "laid down their arms and surrendered", including 51 severely wounded.

Russian defence ministry video showed fighters leaving the plant, some carried on stretchers, others with hands up to be searched by Russian troops.

While both sides spoke of a deal under which all Ukrainian troops would abandon the steelworks, many details were not yet public, including how many fighters still remained inside, and whether any form of prisoner swap had been agreed.

Ukraine's Deputy Defence Minister Hanna Malyar told a briefing that Kyiv would not disclose how many fighters remained inside until all were safe.

Its military said units in Azovstal had completed their combat mission and Deputy Prime Minister Iryna Vereshchuk said Kyiv aimed to arrange a prisoner swap for the wounded once their condition stabilises, but neither side disclosed terms for any specific deal.

Previous : Martin Lewis’s new ‘magic number’ predicts when to fix energy bills to save cash
Next : Single parents set to lose a whole month’s pay this year thanks to rocketing inflation