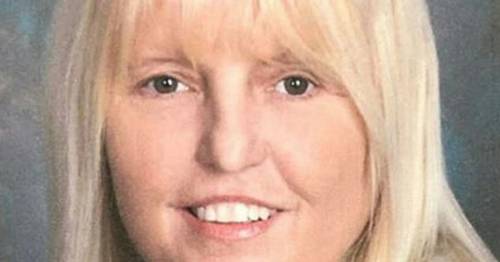 The runaway prison guard and her jailbird lover who went on the run for nearly two weeks had planned to end things with a “shootout” with chasing cops.

The modern day Bonnie and Clyde were tracked down to a motel in Evansville, Indiana, 11 days after Vicky had told colleagues she was taking the brute for a mental health check-up.

Instead of surrendering to approaching officers, the pair attempted to escape in their car but were rammed by police into a ditch.

As 6ft9 White, 38, gave into police, Vicky shot herself in the head and died later of her injuries.

The corrections officer had been close to retirement, said deputies
(

Vanderburgh County Sheriff Dave Wedding has since revealed if they had not been rammed off the road the day could have ended with more bloodshed.

A large number of guns were found inside their vehicle which officers believe would have been used for a desperate shootout with cops.

He told reporters: “We later found out that [if they hadn’t rammed the vehicle], the fugitive was going to engage in a shootout with law enforcement.

“That action may have saved many of my deputies and fellow law enforcement officers’ lives.”

The couple, who were not related, are said to have been in a “jailhouse romance” for around two years.

Their dramatic escape came on the eve of Vicky’s retirement as a correctional officer.

Since their 2020 meeting, Vicky had regularly been driving the two hours to where Casey was incarcerated, at the William E Donaldson Correctional Facility.

She gave a false name to prison authorities.

Her estranged husband died of Parkinson’s in January. Vicky White had no children.

Using the alias of April Davis or Renee Marie Maxwell, she bought the brown Ford – and other essentials.

White also visited a retailer specialising in clothes for tall men plus Sugar and Spice, a sex-themed shop where she bought lingerie and, the owners hinted, a selection of bedroom toys.

Casey White, who was previously accused of a September 2020 stabbing death and was serving time for crimes committed in 2015, will now also face an escape charge

He was seen handcuffed and shackled in the custody of Vicky White leaving the jail in Muscle Shoals, Alabama, about 65 miles west of Huntsville, in late April.

At the time, the corrections officer was believed to be transporting him to the courthouse for a mental evaluation.

Previous : Father and son chop off teenage burglar’s finger after he breaks into their home – World News
Next : Martyn Ford wants “perfect” fight with Thor Bjornsson after Iranian Hulk “farce”