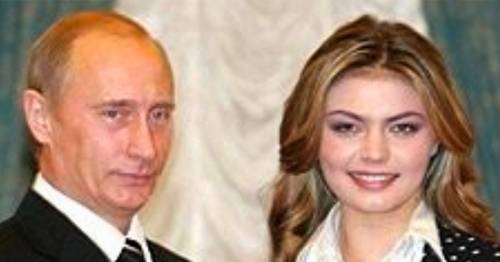 Vladimir Putin's glum demeanor has been blamed on rumours that his mistress is expecting.

Russia's despotic leader, 69, is said to be the father of at least two of Olympic gymnast Alina Kabaeva's children.

But earlier this week the president was said to have been seen looking "depressed and somewhat aloof".

And according to Russian political expert Valery Soloviev, who is said to have a network of Kremlin insiders at his disposal, the leader's upset comes after he found out that 38-year-old Kabaeva has another baby on the way.

The post reads: "We have already reported that yesterday, Russian President Vladimir Putin, according to eyewitnesses, looked depressed and somewhat aloof.

The rumour was posted on a Russian news Telegram thread
(

"This is understandable, yesterday Putin learned that his long-term cohabitant and mother of his children, Alina Kabaeva, was pregnant for another, or rather, apparently, an extraordinary time.

"Here the president would live and be happy, but no…"

One cheeky commenter on the Telegram feed asked: "Who's the daddy?"

Putin has never admitted to being in a relationship with Kabaeva, who now works as a media executive, but multiple reports suggest she is the mother of at least two of his secret children.

One commenter asked: "Who's the father?"
(

She gave birth to her daughters in Switzerland where she is said to now be hiding out the war in a private chalet “somewhere” in the country famous for its neutrality.

Some reports suggest the couple have as many as four children, with one Swiss newspaper claiming she had a boy there in secrecy amid huge security 2015.

The second son was delivered in Moscow in 2019 with the same specialist flying to Russia for the birth, according to Swiss newspaper Sonntagszeitung.

The Russian leader, who will be 70 this year, has since 2007 denied a relationship with the Olympic gold-medal winning Kabaeva.

A younger Alina Kabaeva and Vladimir Putin, whose relationship has long been rumoured
(

The claims were backed up last week by a source linked to the doctor present at the 2015 birth.

Putin has hidden his alleged secret family from voters – and was not present at either of the births.

The report supports strong rumours over a Putin-Kabaeva family.

It also indicates that Kabaeva is the secret Russian first lady at a time when the country is suffering major losses from the war with Ukraine.

Dr Maria Vorontsova, a year younger than Kabaeva, was born when the Russian president was a KGB spy in Germany, is an expert in rare genetic diseases in children. She is a leading researcher at the National Medical Research Center for Endocrinology of the Ministry of Health of Russia.

Maria Vorontsova is alleged to be Putin’s daughter
(

Her divorced sister Katerina is deputy director of the Institute for Mathematical Research of Complex Systems at Moscow State University. She is a former high-kicking ‘rock’n’roll’ dancer.

Both daughters have been sanctioned by the West, unlike Kabaeva, and Putin’s unacknowledged “love child” Luiza Rozova, 19. Luiza is the daughter of cleaner-turned-multimillionaire Svetlana Krivonogikh, 45, now part-owner of a major Russian bank, one of the country's wealthiest women with an estimated £74 million financial and property fortune.

Previous : Former SeaWorld trainer says ‘whales lead lives of desperation at orca prison’
Next : What will be in the Queen’s Speech – and what won’t be but SHOULD be in it