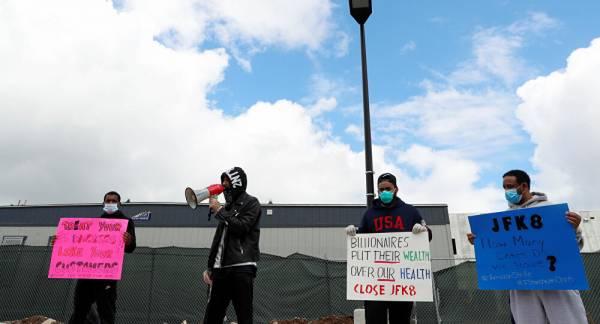 WASHINGTON (Sputnik) – The United States became divided on May Day due to multiple rallies whose participants demanded additional safety measures and the re-opening of the nation’s economy after the lockdown caused by the novel coronavirus disease (COVID-19).

Hundreds of demonstrations are taking place throughout the day across the country on Friday.

National Nurses United (NNU), comprising of over 150,000 registered nurses, is holding about 140 rallies in 13 states in order to urge authorities to provide them masks and other protective equipment.

However, Castillo added, nurses signed up to treat people, but not to sacrifice themselves on the front line of the coronavirus battle.

Dozens of nurses and those sympathetic to them gathered outside hospitals in the city of Oakland, California.

Another 50 nurses have participated in silent prayer outside Keck Medical Center at the University of Southern California in Los Angeles. They signed a petition and rigged up a heart using rose candles.

Similar actions took place inside and outside of hospitals in other major cities, including Washington, New York, and Chicago.

Meanwhile, thousands of people gathered in nationwide protests against stay-at-home orders issued by authorities to combat the coronavirus spread.

“All Jobs Essential,” chanted people gathered in the city of Dover, Delaware. They urged to “End Tyranny” meaning mandatory order to continue stay out of work and schools.

In Chicago, many activists have participated in “Re-Open Illinois” rally. People, some of whom were armed, expressed their opposition to Governor JB Pritzker to extend the stay-at-home order, NBC News said.

Many rallies across the nation took place under the slogan “Make America Great Again May Day”.

“It is time to take a stand for liberty”, organisers said in statement. They accused authorities of attempts to “infringe upon many basic rights of citizens.”

US economy has been shuttered by the coronavirus pandemic. Manufacturing sector activity hit an 11-year low in April as the outbreak kept most American businesses shuttered for a second month in a row, while energy markets weakened as well, data and analysis from the Institute for Supply Management (ISM) revealed.