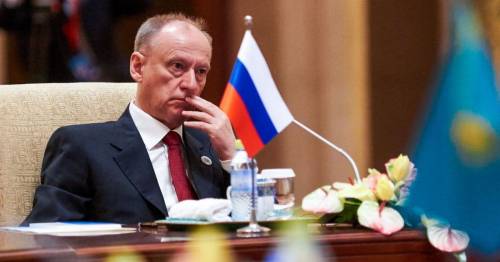 Vladimir Putin's right-hand man, rumoured to be ready to take temporary charge of Russia, "could be even worse than his master", an expert claims.

Nikolai Patrushev is reported to have had a two-hour "heart-to-heart" with the Kremlin leader in recent days amid speculation he is about to or has just had cancer surgery.

Unconfirmed speculation suggests Putin could be forced to step down from power temporarily to recover from the alleged operation.

And he is understood to have made it clear aide and security council secretary Patrushev is who he is lining up to cover for him.

Putin made a speech at the Victory Day parade on Monday morning as rumours continue to spiral about his health.

He coughed and was later seen sat with a blanket over his legs, despite mild temperatures and bright sun, as he watched military personnel march by – not exactly the indestructible strongman he likes to portray himself as.

Rebekah Koffler, a former DIA intelligence officer, said Patrushev is the "most influential person in the Kremlin bureaucracy" and the "only person" Putin trusts.

The author of Putin's Playbook: Russia's Secret Plan to Defeat America went on to say they both come from the same stock of Chekists – a term referring to the powerful secret police agency in the USSR.

The pair are said to have orchestrated multiple atrocities together
(

Writing for the New York Post, she said: "Both men have likely authorised the poisonings and killings of many Russian 'enemies."

She explained, some believe the pair of them ordered FSB officials to bomb apartment buildings in Moscow, killing up to 300 civilians in 1999.

This was supposedly done to frame Chechen terrorists and give pretext for war on Chechnya.

The following March, Putin's popularity was such he secured the presidency.

Alexander Litvinenko accused Putin and Patrushev of orchestrating the bombings and was poisoned by radioactive chemical Polonium-210.

The assassination was described by British Supreme Court Judge Robert Owen as “probably approved by President Putin and his Chief of FSB, Patrushev”.

As head of the FSB, Patrushev led a counter-terrorism programme calling for the "liquidation of the leaders of the Chechen separatist movement".

Ms Koffler said that Patrushev is also a "rabid anti-American propagandist" who recently accused the US of planning to nuke Ukraine and blame Russia.

"There’s an old Russian saying. Literally translated, it means: 'Two boots make a pair'. And Putin and Patrushev fit together perfectly," she added.