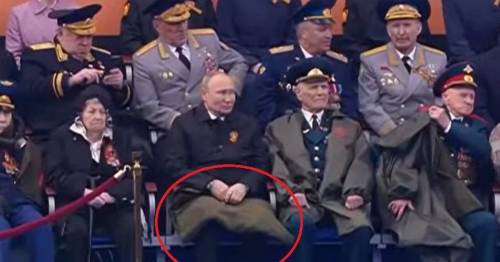 Vladimir Putin is “very ill with blood cancer” an oligarch with close ties to the Russian leader has reportedly been recorded as saying.

The oligarch is believed to have spoken about Putin’s grave health during a conversation with a Western venture capitalist.

It is the latest in many claims about the ill-health of the Russian president which have been exacerbated by images of Putin looking frail and using a blanket during the Victory Day celebrations in Moscow this week.

Publicly the Kremlin has stated that Putin is fit and well but his strict precautions during the pandemic and use of a long table to meet other political leaders have strengthened rumours.

The Western businessman has not revealed the name of the oligarch, so as to protect him, having recorded the conversation without his permission, reports New Lines Magazine.

There have been many rumours about Putin's ill-health
(

The oligarch was heard to say that Putin was also “crazy” with his Ukraine invasion.

He hit out at the way that the Russian leader was destroying the economy in the recording, believed to have been made in March.

“He absolutely ruined Russia ’s economy, Ukraine ’s economy and many other economies — ruined [them] absolutely,” the oligarch said.

“The problem is with his head. … One crazy guy can turn the world upside down.”

The venture capitalist, who has asked for the name of the oligarch not to be named, said he has passed on the recording due to his outrage at the Ukraine invasion.

New Lines Magazine has, though, stated that the oligarch is living outside of Russia and is one of Forbes’ 200 richest Russians.

During the 11 minute long conversation, the oligarch spoke of his contempt for what Putin is doing in Ukraine and hopes that he gets overthrown.

The claim that Putin's condition is now well-known in the corridors of power in the Kremlin is boosted by a secret memo from the Russian security agency to regional directors on March 13 instructing them not to trust rumours about Putin’s “terminal condition”, it is reported.

The Russian President is alleged to be due to undergo surgery, possibly for cancer, according to supposed leaks from within the Kremlin.

And a senior investigative journalist on Russian affairs says the army will disobey any nuclear bomb order as he is so unwell.

Christo Grozev also claims an oligarch close to the dictator says it is better for the world if he dies in the next few months rather than continue his illegal war.

“Recently with colleagues we listened to a recording of an oligarch, extremely close to Putin,” he said.

"This billionaire was telling another oligarch 'It’s better he dies from this'.

"It was better that he was dead 'because he has destroyed us, is destroying Ukraine…and Russia'."

Grozev said of the mega rich tycoon set around Putin: “This is how they think. This is how it is.

“In other words they are actively and passively thinking, how to end this?"

He says his officers are not willing to risk being hauled before a modern equivalent of the Nuremberg trials for unleashing nuclear Armageddon.

Nor would they obey a Putin order to kill opposition forces, claimed Mr Grozev, who is associated with the Bellingcat open source research group.