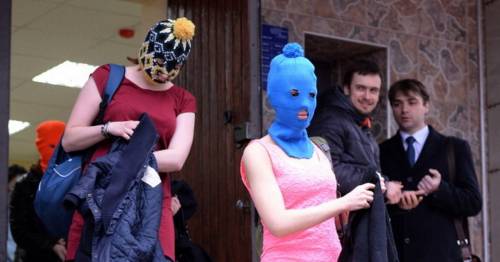 The lead singer of Russian protest band Pussy Riot escaped house arrest in Moscow by disguising herself as a delivery driver to evade a brutal clampdown on dissenters.

Maria Alyokhina was facing a sentence in a penal colony under harsh laws banning criticism of warmongering President Vladimir Putin.

Incredibly she was able to evade police in the Russian capital despite effectively being under house arrest – in an escape she likened to a "spy novel".

Now safely in Lithuania, Alyokhina is among tens of thousands of Russians who have left the country after draconian laws to clamp down on opposition were brought in following the invasion of Ukraine.

She said the band now plans to tour to raise money for those affected by the war.

She told The New York Times : “A lot of magic happened last week. It sounds like a spy novel.”

In an interview she revealed that she disguised herself as a food courier to get away from Moscow, where she was being closely watched.

Alyokhina, 33, said: “I don’t think Russia has a right to exist anymore.

Alyokhina being detained by police during a protest in 2014
(

"But now I don’t think that is a question anymore.”

Alyokhina, who has been jailed repeatedly for staging protests against the Putin regime, was able to cross the border into Belarus.

She was helped by an Icelandic friend who was able to smuggle her travel documents.

These helped her reach Lithuania a week later, the newspaper reported, as her Russian passport had been confiscated by authorities.

She said that although modern Russia looks like a "big demon" from the outside, her escape demonstrates that it is "very disorganised".

In her experience, the activist said, the "right hand doesn’t know what the left hand is doing".

Punk band Pussy Riot were first catapulted into the limelight a decade ago when they held a dramatic anti-Putin protest at Christ the Saviour Cathedral in Moscow.

This landed members a two year prison sentence, but did not deter their activism.

Earlier this year she was sentenced after posting anti-Putin messages on Instagram, and her fellow band members have also been targeted in recent months.

She was facing a 21 day sentence in a penal camp for dissent, she said, and a sinister sign branding her a traitor appeared on the door of the home she shared with girlfriend Lucy Shtein, who also escaped.

“They are scared because they cannot control us,” Alyokhina stated.

Earlier this year two of her bandmates, Nadya Tolokonnikova and Nika Nikulshina, were labelled "foreign agents" by the Russian government – effectively accusing them of being spies.

The Russian justice ministry said in a statement: “These people systematically distribute materials to an indeterminate circle of persons, while receiving foreign funds.”

Putin's invasion of Ukraine has sparked a fresh clampdown on dissent
(

Alyokhina said escaped band members will be performing to raise funds to help those affected by Putin's invasion of Ukraine.

The first date will be in Berlin later this month.

Millions of Russians are inundated with propaganda on state news outlets, and lying Putin on Monday attempted to convince them he had no choice but to go to war.

Putin claimed that an "aggression" was planned against Russia and alleged that Kyiv was creating an "unacceptable threat", repeating the lie about Nazism in Ukraine.

Previous : Woman slapped with £100 airport fine for pulling car over during panic attack
Next : ‘I’m 19 but a rare condition means trolls tell me I look like a toddler’ – World News