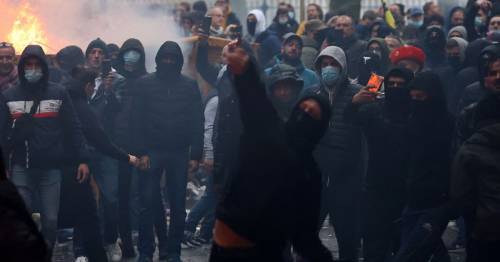 Anti-lockdown protesters clashed with police in the Belgian capital Brussels on Sunday as officers fired water cannon at the crowds.

It comes after at least seven people were injured in Rotterdam, the Netherlands, after police opened fire on demonstrators furious about new restrictions.

A new wave of coronavirus is sweeping across Europe, forcing many governments to introduce new measures to curb the spread of the disease.

On Sunday, around 35,000 people took part in the rally in Brussels.

Protesters wearing black hoods threw stones at police as they advanced with water cannon at the main junction in front of the European Union Commission headquarters.

Facing up to the police lines, the protesters held hands and chanted "freedom".

Police used water cannon against the crowd as clashes broke out
(

Belgium tightened its coronavirus restrictions on Wednesday, mandating wider use of masks and enforcing work from home, as cases rose in the country's fourth Covid-19 wave.

There have been 1,581,500 infections and 26,568 coronavirus-related deaths reported in the country of 11.7 million people since the pandemic began.

Firefighters worked to extinguish a blaze during the demonstration
(

Infections are increasing again, with 13,826 new cases reported on average each day.

Violence has also broken out in anti-restriction protests in Belgium's neighbour the Netherlands in recent days.

On Friday, police in Rotterdam opened fire on a crowd and blamed football hooligans for clashes.

It comes after the Netherlands imposed a 7pm curfew for pubs and restaurants to try and curb rising Covid cases.

Tens of thousands of people also protested in the Austrian capital Vienna following the announcement of a new lockdown and plans to make vaccines compulsory next year.

Meanwhile, anti-vaxxers gathered in the centre of Zagreb, Croatia's capital, to vent their anger over mandatory vaccinations for public sector workers.

Some demonstrators wore the yellow Star of David in a twisted reference to the Nazi persecution of Jews, euronews.com reports.

Crowds also marched through Zurich and Lausanne, in Switzerland, ahead of a national vote on vaccine passports.

In Italy, a few thousand anti-vaxxers descended on the ancient Circus Maximus chariot-racing ground amid a range of new measures in the country.

Trains in Italy can now be stopped if any passengers appear to be infected, while taxi drivers are required to have a Covid passport.

Germany has also joined other European countries in taking drastic steps to stop Covid by banning unvaccinated citizens from using public transport or going into the office from next week.

The World Health Organization (WHO) has warned that Europe is at the epicentre of the pandemic.

Police were attacked with smoke bombs and fireworks during the chaos
(

However, the UK is not expected to see a spike in Covid cases like Europe, according to a SAGE adviser.

Professor John Edmunds, who is a member of the Scientific Advisory Group for Emergencies (SAGE), today urged those who are eligible for their booster jabs to get them adding "it is pretty clear immunity does wane".

He told Sky: "What you see now in central Europe with these rapid increase in cases, you see the importance of vaccination."