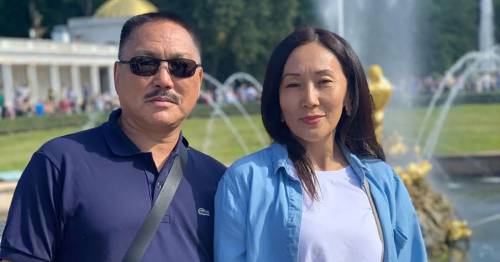 The wife of a regional pro-Vladimir Putin politician and her daughter have been killed – and there's been a media crackdown imposed in Russia.

Nadezhda Innokentyeva, 51, and her daughter Anzhelika Popova, 31, a fashion brand owner and mother-of-one, were knifed to death.

This has become public knowledge despite state TV and news outlets being ordered not to cover the massacre.

The wife and father of the victims are pro-Putin district chief Alexei Innokentyev, 53, and the suspect – now detained – is his son Aisen Innokentyev, 21.

The politician controls a vast area called Nyurbinsky district more than twice the size of Wales in the world’s coldest region, Yakutia, Siberia.

Nadezhda (right) died of the wounds on the way to hospital. Anzhelika (left) pictured with her daughter (middle)
(

Anzhelika Popova is normally based in St Petersburg and owns a clothing brand. She was killed on the spot from wounds to the chest and abdomen.

Her mother also died on the way to the hospital.

Aisen made a written confession over the killings of his mother and sister at the family home in the regional capital Yakutsk, according to reports from independent media.

Innokentyev handed himself in and initial tests show he had been intoxicated during a family argument over his friends.

The reason for the media crackdown was not clear but the state media are said to be under orders to limit bad news.

Similarly, there are severe restrictions on coverage of the war in Ukraine.

There is also a ban on footage and details of destructive forest fires raging in Russia.

Aisen with his mother Nadezhda
(

These are spaces that tens of millions of Russian citizens rely on for access to independent information and that has now been compromised.

The US State Department said such blockages limit "where and how Russian citizens can see and share evidence of the truth of Russia’s invasion of Ukraine.

They have a right to know about the death, suffering and destruction being inflicted by their government on the people of Ukraine."

Previous : Five second test that tells you if it’s too hot to walk your dog
Next : Man found half-eaten by crocodile after friends watch him being dragged underwater – World News