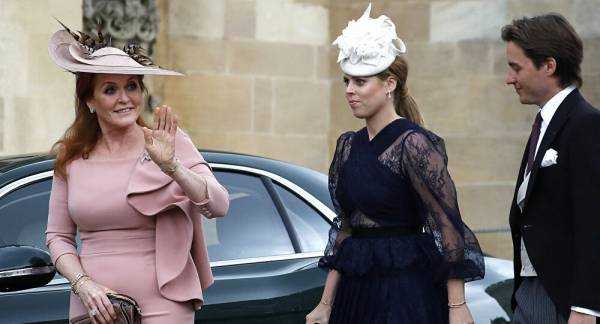 The Duke of York has been under even more intense scrutiny recently following the FBI’s arrest of Jeffrey Epstein’s former girlfriend Ghislaine Maxwell. She is accused of grooming girls for the disgraced billionaire. One of Epstein’s alleged victims previously claimed she was trafficked to London and forced to have sex with Prince Andrew.

Princess Beatrice had to marry in a private ceremony due to the sex scandal her father Prince Andrew has been involved in, The Mirror reported citing the groom’s cousin. The 31-year-old tied the knot with Italian developer Edoardo Mapelli Mozzi on 17 July at the Royal Chapel of All Saints in Windsor. The intimate ceremony was reportedly attended by no more than 20 people, all of them close friends and family, including Beatrice’s grandmother Queen Elizabeth II. Dario Mapelli told The Mirror that the couple scaled down the ceremony to avoid public attention and shield Beatrice’s father from media scrutiny.

“We heard it was postponed to next year but that was clearly to keep it secret. Maybe they did it now to be sure that the Queen could be there. Or perhaps because of the problems with her father they didn’t want to go overboard with publicity in case anyone criticised them”, Dario Mapelli Mozzi told The Mirror.

However, friends of the royal family contradict the report. One of them told the Daily Mail, the modest wedding was in no way connected to the scandal Prince Andrew has been involved in. At the same time, a source close to the family noted that the scandal had been “tremendously difficult” for the royal family.

“Those children have been so devastated by it all, so it was really nice to have this wedding away from the public eye. They were all there and Sarah [Princess Beatrice’s mother] kept the show on the road. Very, very few people were given any information about it”, the source close to the family told the Daily Mail.

A palace statement about the ceremony hints that the modesty of the wedding was due to government safety rules during the coronavirus pandemic.

“The wedding took place in accordance with all relevant government guidelines”, read the palace’s statement.

All wedding-related events, involving gatherings of people, were banned after British authorities imposed safety measures to stop the spread of the coronavirus. But at the beginning of the month the government lifted restrictions and allowed ceremonies of up to 30 people to take place.

Friday’s wedding was was attended by Beatrice’s grandmother Queen Elizabeth II and her husband Prince Philip. It is believed to be the first time that the Queen attended a family gathering since the coronavirus outbreak.

A source told People magazine that there was no COVID testing prior to the wedding, but all attendees practiced social distancing to ensure everyone, especially the Queen and her husband Prince Philip, were in good health.

Princess Beatrice and Italian property developer Eduardo Mapelli Mozzi began dating in 2018 and planned their wedding for 2019, but it had to be postponed due to the controversy over her father’s purported ties with Jeffrey Epstein, who was arrested last year on charges of running a sex trafficking network of minors. Then the wedding was delayed by Brexit negotiations and again this year due to a royal crisis sparked by Prince Harry and Meghan Markle’s decision to step down from the senior roles in the royal family.

Pricess Beatrice’s father has been under even more intense scrutiny since the arrest of Jeffrey Epstein’s former girlfriend and Prince Andrew’s good friend Ghislaine Maxwell. Maxwell faces six charges including one of enticing minors as young as 14 to engage in illegal sex acts. One of Epstein’s alleged sex victims, Virginia Giuffre, claims she was trafficked to London, where she was forced to have sex with the Duke of York on three occasions, including when she was 17. Giuffre claims it all happened at Maxwell’s house.

Prince Andrew has vehemently denied the allegations and claimed he has an alibi. He also said he doesn’t remember meeting Giuffre despite the existence of a photo, showing the royal together with young Giuffre and Ghislaine Maxwell.

Previous : ‘I lost my business to COVID’ alleged bank robber writes on note to teller
Next : Protesters Rally in France Against Police Brutality in Memory of Adama Traore – Video