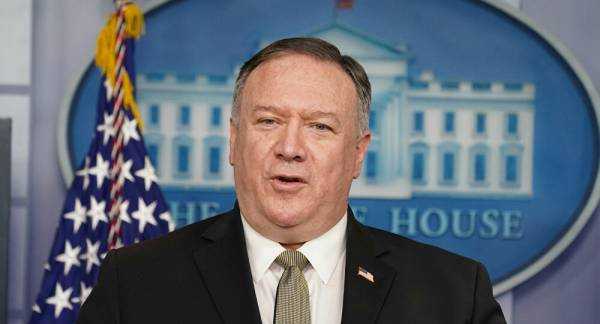 The spate of recriminations over the origins of the COVID-19 pandemic escalated last week after the US president accused China of ‘concealing’ the outbreak and mismanaging its containment, going so far as to claim the pandemic was the result of a leak at the Wuhan Institute of Virology. Chinese officials have forcefully denounced the claims.

US intelligence is “still figuring out precisely” where the coronavirus outbreak began, with Washington “demanding” that China be more “transparent and open” regarding its origins, Secretary of State Mike Pompeo has declared.

“China could have spared the world a descent into global economic malaise. They had a choice but instead – instead China coverd up the outbreak in Wuhan,” Pompeo claimed. He added that China was “still refusing to share the information we need to keep people safe, such as viral isolates, clinical specimens and details about the many COVID-19 patients in December 2019, not to mention patient zero.”

“As a result of China’s choices, countries are starting to understand the risks of doing business with the Chinese Communist Party and taking action to protect their people,” Pompeo added, suggesting multiple states have now accused China of “lying” about the outbreak.

At the same time, Pompeo suggested that US demands toward China were “not about politics” or any attempt to bully or blame Beijing, adding that the US would be “happy” to provide the country with technical assistance on the virus.

The secretary of state’s remarks come just hours after Chinese Foreign Ministry spokeswoman Hua Chunying blasted his earlier claims about there being “enormous evidence” that COVID-19 originated at the Wuhan P4 biolab.

The foreign ministry spokeswoman urged that US to “handle its domestic affairs properly first” instead of trying to shift the focus on China. “The most important thing now is to control the US’ domestic pandemic spread and think of ways to save lives,” she said.

Hua also warned Washington against making threats to use tariffs against Beijing over China’s ‘mishandling of the coronavirus crisis’, saying a new trade conflict would hurt all parties involved.

The back-and-forth jabs come following rhetoric by President Trump last week claiming the US had evidence that the novel coronavirus leaked from a Chinese biolab, a claim some of his own intelligence officials have rejected. On Tuesday, Trump promised to release a report on the virus’s origin soon.

Earlier, US media reported that the Five Eyes – the intelligence alliance consisting of the US, the UK, Australia Canada and New Zealand deemed it “highly unlikely” that COVID-19 leaked as a result of an incident at the Wuhan Institute of Virology, saying the more likely explanation was that the virus leaked as a result of natural human infection caused by human-to-animal interaction.

At the moment, the consensus among most scientists in both China and the West is that COVID-19 originated in bats and jumped to humans at the Wuhan wet market, a major Chinese market featuring many exotic delicacies enjoyed by some wealthy residents. Last week, the US Office of the Director of National Intelligence said the US intelligence community “concurs with the wide scientific consensus that the COVID-19 virus was not man-made or genetically modified.”

Previous : Antigen versus antibody testing for COVID-19: What you need to know
Next : US Treasury Says to Auction New 20-Year Bond Anticipated to Raise $20 Bln for COVID-19