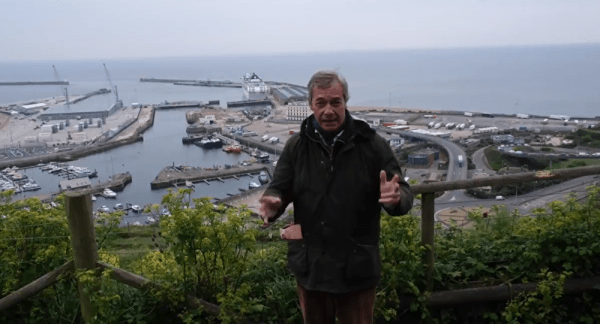 Brexit Party leader Nigel Farage said that he was visited by authorities after travelling to report on illegal immigration in Dover.

Mr Farage made numerous journeys to the south eastern region to report on the alleged scandal, where he said he “witnessed first hand our Border Force acting as a taxi service for illegal migrants”, according to a tweet on Monday.

He tweeted: “This scandal continues and people have got every right to be angry about it.”

Local police were “bombarded” with outrage after he defied quarantine measures following his first trip to Pett Level beach.

Farage shared a second video in Dover, where he said he was “not going to let this story drop” despite media backlash over his trip in East Sussex.

Mr Farage tweeted: “Lockdown lunacy. Two police officers just knocked on my door to advise me on essential travel. They had received a complaint that I had been to Dover to report on the illegal migrant scandal taking place.”

“What a total waste of time and money,” he added.

​But his comments contradict statements he made in a further Leading Britain’s Conversation (LBC) talk last week, where he accused those breaking lockdown protocols of “middle-class hypocrisy”.

He told the LBC: “Between 70-80 per cent of people think lockdown should continue. Yet when I went out at the weekend on Saturday I passed a local historical attraction, you couldn’t get in the carpark. I’ve never seen so many cyclists on the road in all my life. These aren’t short distance cyclists, people popping out for an hour, people popping out for the day in absolutely huge numbers. It almost seems to me there’s a bit of middle-class hypocrisy here.”

The news comes as the UK continues to grapple with the ongoing coronavirus pandemic, after it was reported that total deaths reached 32,000 on Tuesday, or the highest in Europe to date.

UK health secretary Matt Hancock has come under fire for failing to tackle the crisis, including missing targets for PPE to frontline staff and 100,000 a day COVID-19 testing quota.

Previous : US Service Sector Slows Down For First Time in Decade
Next : UK Unions Refuse to Support Government’s Back-to-Work Plans Amid Safety Concerns