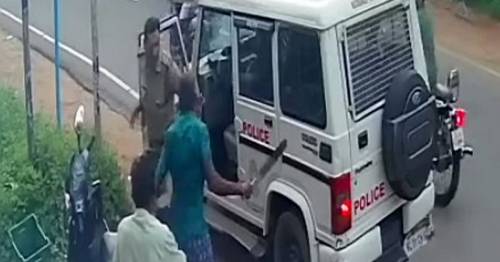 This is the astonishing moment a police officer disarms a machete-wielding man using his bare hands.

Arun Kumar was on patrol near Kayamkulam, in India, when he was attacked by a man.

Footage shows the police officer getting out of the patrol car and approaching the man, who is on a moped.

The man then reaches for a large blade in a white towel before threatening the cop with it.

The man shows his weapon and then swings the machete at Mr Kumar, who amazingly stops it with his hand.

The pair then ensues in a tussle before the cop manages to wrestle his attacker to the ground and disarm him.

The accused was taken into custody and the weapon used in the attack was seized, according to reports.

Mr Kumar was awarded a trophy and certificate for his bravery in the June 12 attack.

He needed seven stitches on his hand from the grabbing the blade and luckily did not suffer any serious injuries.

Mr Kumar said: "I got hold of him before seizing the weapon and brought it to the police station. He has since been remanded.

The officer was given an award for his bravey
(

"I have seven stitches on my hand but fortunately no serious injuries. He attacked me with a machete without any provocation."

It is unclear what caused the altercation, but the CCTV of the fight has gone viral.

Many online have praised the bravery of the cop.

One said the fight was like "a movie scene".

Another wrote: "Grit and bravery. Salutations Sir. May God bless you."

One added: "Salute to this Braveheart's courage!"

The cop disarmed the man with his bare hands
(

In 2019, we reported how a police officer risked his life for a commuter who ran across rail tracks in a bid to catch an approaching train after seeing the man struggling to climb onto the platform.

CCTV footage showed Anil Kumar, 55, jumping onto tracks and racing over to a man wandering towards the platform.

After giving the man a push to safety he dashes out of the way of the fast-moving train.

India's Railway Minister Piyush Goyal praised the bravery of the policeman on Twitter.

He wrote: "Courageous work by RPF Constable Anil Kumar, who promptly jumped to the rescue of a commuter crossing the rail tracks to save him from an oncoming train in Mumbai.

"It is strongly advised to use overbridges to avoid such incidents which may be fatal."

Previous : Woman shares how priest tried to ‘cure’ her of homosexuality with oil ritual – World News
Next : Fleeing driver grabbed police officer’s arm and dragged her down road as she screamed