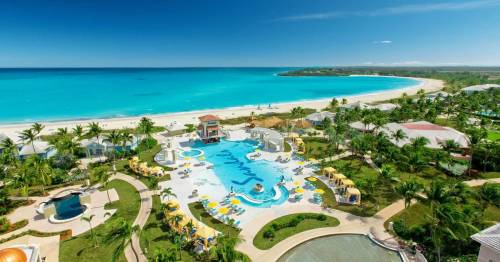 Police investigating the sudden death of two men and a woman in a luxury resort in the Bahamas have issued a statement as mystery surrounds the incident.

The tragedy was uncovered yesterday morning on the island of Exuma, while a fourth woman was reportedly airlifted to hospital.

Investigations are ongoing into the cause of the trio's deaths at the Sandals Emerald Bay resort.

After being alerted to the death of a man in a luxury villa, police discovered the bodies of a man and a woman in a second villa, the statement says.

The couple had complained of feeling ill the previous evening, and had suffered "convulsions", detectives said.

A statement released by police said: "Our initial investigations revealed that the couple found in the second villa complained of illness the previous evening. They attended the local medical facility and on completion of receiving treatment, they returned to their lodging.

"The coroner was appraised of the facts surrounding both scenes. The police will await an autopsy report to determine the the exact cause of death."

He said that foul play "is not suspected", but admitted the cause of the deaths is unknown.

A Sandals spokeswoman told the Mirror staff had initially been alerted to a health emergency, with medics quickly sought.

She added the guests' families are being supported.

Mr Cooper said in a statement: “I have been regretfully informed today of the death of three American visitors, two men, and a woman, at a resort property on Exuma.

"Another American woman has been airlifted to Princess Margaret Hospital.

“I have been briefed by the commissioner of police and the resort’s executive management on the matter. I am currently in Eleuthera on ministerial business. As I am acting in the capacity of prime minister, I have briefed Prime Minister Davis on the matter.

He continued: “Police are investigating and the cause of death is still unknown.

He added: “The public will be kept abreast of information as soon as it becomes available. We offer our thoughts and prayers to the families affected.”

Previous : REVEALED: The 32 most dangerous jobs in the UK from firefighter to painter
Next : Taliban forces women in Afghanistan to start wearing head-to-toe burkhas again – World News