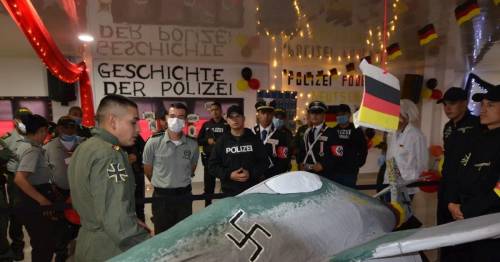 Colombian police cadets dressed as Nazis and one even donned a Hitler moustache in a disastrous attempt at diplomacy.

The German "cultural exchange" was intended to "strengthen the knowledge of students," according to an official police account which tweeted photos from the event.

The ceremony began with two officers in official police uniforms cutting a ribbon in the colours of the countries' flags as a colleague dressed as Adolf Hitler watched on, local media reported.

Inside others were dressed as members of the SS, with swastika armbands and replica German guns.

There were models of tanks and missiles, balloons in the red, yellow and black of the German flag and a replica Luftwaffe plane.

Cadets at the "cultural exchange" event

Footage also shows the man dressed as Hitler standing to attention in front of a car alongside a German Shepherd.

Images from the event were tweeted with the caption: "From the SimonBolivar police academy in the city of Tulua, we are organizing an #InternationalWeek with guest country #Germany.

"With these cultural exchanges, we are strengthening the knowledge of our police students."

They were met with horror online and saw the country's President Iván Duque issue an apology.

He tweeted: "Any apology to Nazism is unacceptable and I condemn any manifestation that makes use or reference to symbols alluding to those who were responsible for the Jewish holocaust that took the lives of more than 6 million people. Anti-Semitism has no place in the world."

Police cadets cut a ribbon at the start of the event

His sentiments came after an international backlash against the officer's actions, with the Israeli and German embassies in Colombia writing a joint letter which stated: "Events like this are outrageous and directly offend not only Jews, but also all victims of the Nazi regime and its criminals."

The police dismissed the man in charge of the academy and the Defence Ministry expressed its outrage.

The nation's police force which is undergoing a rebrand following brutal repression of anti-government protests.

US ambassador Philip S. Goldberg, said he was "shocked and deeply disappointed by the use of Nazi symbols and uniforms in the training facilities of the Colombian Police," adding: "no explanation is enough."