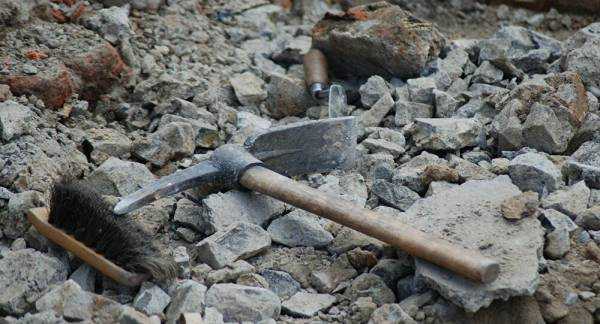 Archaeologists working in Santa Lucia, a town located roughly 30 miles from Mexico City, Mexico, recently came upon quite the discovery after managing to dig up more than 60 remains belonging to the long-extinct Columbian mammoth.

The team, which consists of some 31 archaeologists and three restorers, made their grand discovery at a vast construction site that is in the progress of turning the defunct Santa Lucia Air Force Base into the Felipe Angeles International Airport. Excavators have been working at the site since April 2019, according to Mexican news outlet Excelsior.

Images shared on social media of the find offer a peek at the massive tusks of one mammoth, whereas other images show the intricate designs of a vessel discovered at the site.

Aside from mammoth bones, officials found the remains of a bison, a camel, a horse and a canid, a carnivorous member of the canine family. Additionally, excavators were able to unearth more than a dozen human burial sites that included vessels.

Pedro Francisco Sanchez Nava, an archaeologist associated with Mexico’s National Institute of Anthropology and History, told Excelsior that the greatest challenge the team encountered was the site itself, as the “wealth of the fauna and vestiges has been more than what [the team] had considered.”

In fact, the team reported in December 2019 that they had discovered a variety of animal bones at the site. It’s speculated that the animals ultimately died after becoming stuck in the ancient lake’s muddy remains.

Moving forward, Nava indicated that researchers would continue to work in coordination with officials who are building the new civilian airport.

As for the new fossils, additional examinations will be conducted by the team.

Previous : What to Stream: Nanni Moretti’s “Dear Diary” and the Power of the Film Camera as Sketchbook
Next : US House Lawmakers Demand Summary Report on Ventilator Talks Between Trump, Putin