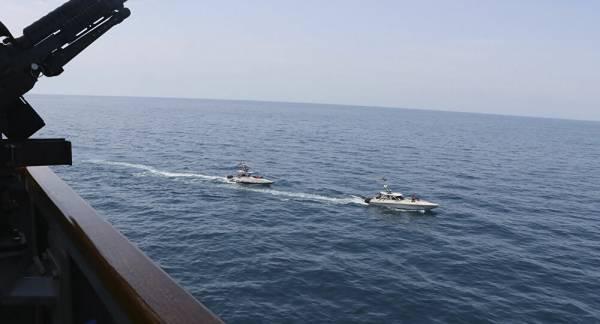 In April, US President Donald Trump announced via his Twitter that he had given the green light to the American Navy to attack and sink small Iranian military vessels if they start harassing US military ships.

The statement came after Iranian President Hassan Rouhani warned the US against preparing any military moves in the Persian Gulf, pointing to the historic name of the waterway.

He also underscored that Iran has successfully protected the waterway for years and will continue to do so.

Rouhani was echoed by Brigadier General Abolfazl Shekarchi, the spokesman of the Iranian armed forces, who cautioned that if US forces engage in any acts of aggression against Iran’s territory or its people, Tehran will provide a harsh response.

The remarks followed US President Donald Trump tweeting in late April that he had “instructed the United States Navy to shoot down and destroy any and all Iranian gunboats if they harass our ships at sea”.

A spokesperson for the Iranian Armed Forces responded by advising Washington to focus on saving its own military from the coronavirus outbreak instead.

This followed an incident on 15 April, when the US Central Command said that 11 vessels of the Iranian Revolution Guard Corps Navy (IRGCN) had conducted “dangerous and provocative” manoeuvres around US warships in the Gulf for roughly an hour.

The simmering tensions between Washington and Tehran escalated further in early January, when top Iranian general Qasem Soleimani was killed in a US drone strike at Baghdad International Airport, in what was authorised by President Trump. In retaliation, Iran launched dozens of missiles at two US bases in Baghdad on 8 January, with over 100 US troops diagnosed with brain injuries of various severity as a result of the strikes.

The bilateral tensions have been in place since POTUS announced in May 2018 the US’ unilateral withdrawal from the 2015 Iran nuclear deal, also known as the Joint Comprehensive Plan of Action (JCPOA), also reinstating strict economic sanctions against the Islamic Republic. Exactly a year later, Tehran said that it starts suspending some of its JCPOA obligations.

Previous : The pandemic is hitting counties that voted for Hillary Clinton harder — for now
Next : US Imposes Iran-Related Sanctions on Investment Company, Individual, Treasury Says