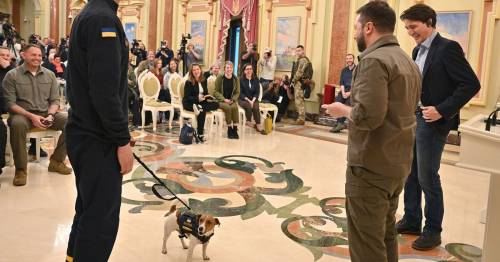 A tiny Jack Russell has been given a medal for bravery after sniffing out more than 200 landmines in Ukraine.

Patron, whose name translates to 'bullet' in Ukrainian, was formally recognised by President Volodoymyr Zelensky with a military honour on Sunday.

The announcement was made during a news conference in Kyiv with Canadian prime minister, Justin Trudeau.

Mr Zelensky said: "Today, I want to award those Ukrainian heroes who are already clearing our land of mines.

"And together with our heroes, a wonderful little sapper – Patron – who helps not only to neutralize explosives, but also to teach our children the necessary safety rules in areas where there is a mine threat."

As Patron and his owner Myhailo Iliev were presented with their medals, the Canadian leader patted his pockets pretending to look for treats.

Pint-sized Patron couldn't have been prouder to receive his award and responded with barks and a wagging tail.

The two-year-old Jack Russell has become something of a national hero and a symbol of Ukraine's resistance against Russia.

He has inspired numerous artworks and viral social media posts across the country, from illustrations to soft toy replicas.

Since the Russian invasion began in February, the four-legged hero has saved countless lives by detecting hidden landmines across woodlands in Ukraine.

And up until he received his reward, Patron did it all in exchange for slices of cheese and belly rubs.

The country's foreign ministry said on Twitter : "Patron is a service dog in Chernihiv. He has discovered over 150 explosive devices in Ukraine since the full-scale Russian invasion began.

Patron worked tirelessly to protect his country in exchange for cheese
(

"Patron works closely with deminers to make Ukrainian cities safe again. Thank you so much for your service."

Ukraine's State of Emergency Service (SES) dubbed him a "good boy" for helping pyrotechnicians in the Chernihiv region clear the area of "Russian gifts".

A video of the pup's hard work was shared online, with the organisation adding: "One day, Patron’s story will be turned into a film, but for now, he is faithfully performing his professional duties."