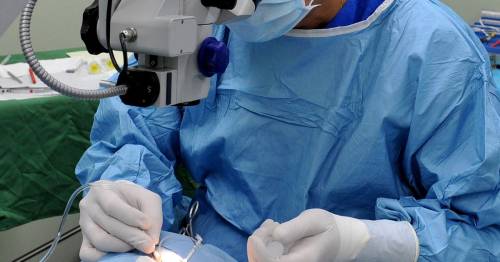 A man was left blinded after a doctor removed the wrong eye during an operation.

The incident happened at a major hospital in Slovakia, where the patient was supposed to have surgery on a damaged eye.

Instead the doctor operated on the man's healthy eye, leaving him and his family requiring psychological care and support to deal with the consequences of the error.

Slovakia's TASR news agency reported that a Bratislava University Hospital spokesperson confirmed that the doctor who performed the operation was no longer in contact with patients.

The country's health supervision authority have launched an investigation into the incident and the circumstances surrounding how such a devastating mistake was made, say reports.

The doctor involved is no longer working with patients. File image
(

The error comes amid a turbulent time for the Slovak health sector, with an industrial dispute rumbling on over pay and working conditions.

Slovakia has seen a large exodus of medical staff, particularly to the Czech Republic and Austria.

Pressure on those doctors left in the country has increased significantly due to the coronavirus pandemic and last week the LOZ union said around 3,000 doctors were considering quitting unless their work conditions improved.

Operating errors are also prevalent in the UK. Data from 2019 showed that 621 “never events” – blunders so serious they should never happen – had occurred in a 14-month period.

The country's health supervision authority have launched an investigation into the incident. File image
(

That’s the equivalent of nine patients every week, according to data obtained by the PA news agency at the time.

The figures showed doctors had operated on the wrong body parts and left surgical tools (including surgical gloves, chest drains and drill bits) inside patients many times over.

Two men were mistakenly circumcised, while a woman had a lump removed from the wrong breast and two others had a biopsy taken from their cervix rather than their colon.

A further six women had ovaries removed in error during hysterectomies, plunging them into menopause.

Previous : “Chee$e” Is a Model of What Independent Filmmaking Should Be
Next : Floyd Mayweather claims he earns $300million every month despite Jake Paul jibe