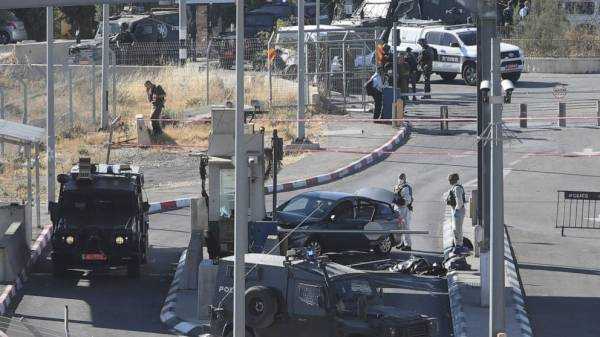 JERUSALEM —
A Palestinian driver died Tuesday after he was shot by an Israeli policeman at a checkpoint in the West Bank in what police said was an attempted attack on Israeli military personnel.

But the man’s family cast doubt on the police account, saying he was planning to get married next week and had no reason to attack Israeli security forces.

According to police, the driver attempted to run over a member of the paramilitary border police force at the checkpoint east of Jerusalem and an officer opened fire at the vehicle.

Police did not immediately release video of the incident, and there was no way to independently verify the account.

Police released a photo that appeared to show the vehicle after it had collided into the checkpoint.

Relatives identified the man as Ahmed Erekat, a 27-year-old owner of a printing shop. They said Erekat had rented the car as he prepared for his sister’s wedding party later Tuesday, and his own wedding was scheduled next week.

“There is no way on earth he would attempt to carry out an attack,” his cousin, Hiba Erekat, said.

In recent years, Israel has seen car-ramming attacks, shootings and stabbings carried out mostly by lone Palestinian attackers with no apparent links to armed groups.

But Palestinians and human rights groups have also accused Israeli security forces of using excessive force, or in some cases opening fire at cars that merely lost control.

Tuesday’s incident came as the Israeli government says it is advancing plans to annex parts of the occupied West Bank in line with the Trump administration’s Mideast plan as early as July 1.

The Israeli annexation proposal has outraged the Palestinian leadership, which has rejected the Trump plan out of hand, and drawn condemnation from much of the international community.

Previous : Jurgen Klopp would prefer Man City and Liverpool to meet in Manchester
Next : How Long Will the Vandals Run Amok?