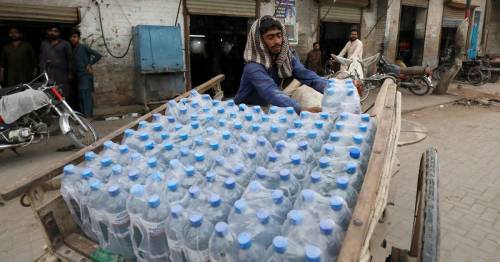 Residents of a city in Pakistan have endured an unprecedented heatwave for more than 50 days.

Experts fear temperatures have reached highs that push the boundaries of human survivability in landlocked Jacobabad – one of the hottest places on Earth.

It comes as the UK faces thunderstorms and torrential downpours tomorrow, bringing a halt to its own mini heat surge.

However experts are also predicting a super summer of sunshine with claims of four heatwaves heading our way – but nothing like the levels in Jacobabad.

Since March, the whole of the Sindh Province has seen consistent values of around 38C or over.

In recent weeks, temperatures have hit a staggering 50C.

The heatwave has gripped other parts of the country too, as well as India, affecting more than a billion people on the subcontinent.

Field workers in Jacobabad are filling up the wards at the heatstroke centre at the city's Civil Hospital with severe dehydration.

The rising temperatures and humidity add to water stress, electricity shortages and a lack of heat adaptation measures.

Experts say the conditions have exceeded the thresholds for what the human body can stand.

Summers are arriving earlier each year but forecasters fear climate change could see these extreme conditions lasting for 10 months at a time.

According to a report in the World Weather Attribution Initiative, the ongoing high temperatures have been made 30 times worse by climate change.

People drink water being distributed by volunteers along a street
(

It says the current weather spell has caused more than 90 deaths and led to glacial melts in northern Pakistan and a drop in wheat crop yields in India.

The report adds: "With future global warming, heatwaves like this will become even more common and hotter."

Pakistan as a whole is one of the top 10 countries most vulnerable to climate change.

But contributes less than 1% of global greenhouse gases.

At the UN's climate change conference in 2009 – COP15 – developed nations promised to provide $100 billion in climate funding for developing nations within a decade.

But the promise is yet to be fulfilled, reports Inside Climate News.

After an unprecedented heatwave in 2015 which led to 1,500 deaths in Karachi, an extreme weather management plan was put in place, including alert systems and the introduction of a cooling infrastructure.

However, despite a reputation for extreme heat, Jacobabad has no such plan in place – and the city's healthcare infrastructure is not prepared for such long-stretching waves of extreme heat.

A grandmother visits her grandson while he sleeps, during a heatwave, at the Jacobabad Institute of Medical Sciences
(

The heatstroke centre was founded by a non-governmental organisation, and only has four beds.

Residents are left to take it upon themselves to provide measures to help curb the conditions.

For example, on Friday afternoons groups on young men set up stations handing out plastic cups of cold drinking water to passersby on side roads, highways and outside mosques.

Meanwhile, if someone suffers heat-related symptoms, people band together to put the patient in the shade and bring out cold water buckets.

But a USAID report published last year confirmed that clean water supply to Jacobabad is hampered by frequent power cuts at the water filtration plant, a lack of technical staff on site and little coordination among local government bodies.

Residents are left to buy water from private distributors, eating into the little money earned on average.

Often during the summer, people will pack up their belongings and temporarily move to cooler cities.

According to a report published by Action Aid, by 2030 climate change-induced disasters will force more than 600,000 people in Pakistan to migrate.

Previous : Model found dead in suitcase days after predicting her own death in secret video – World News
Next : The TikTok iceberg is headed for big media