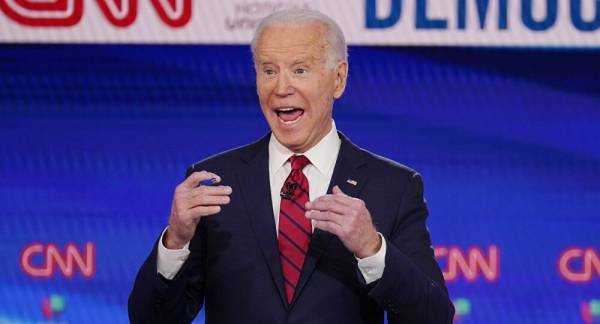 Tara Reade, who worked for former US Vce-President Joe Biden nearly 30 years ago, filed a criminal complaint with police against him in Washington DC in April, accusing the now presumptive Democratic presidential nominee of sexual assault.

According to a survey by global technology company Morning Consult, twenty-six percent of Democratic voters said the party should select a different candidate for the 2020 general election, after Joe Biden denied allegations that he sexually assaulted former employee Tara Reade.

Of the 1911 self-proclaimed registered voters who took the poll, 61 percent said they support Biden following the allegations.

The poll was conducted amid growing attention on Biden due to the Tara Reade case.

According to Morning Consult, respondents were shown a 35-second video clip of Biden’s first interview on the subject, in which MSNBC’s Mika Brzezinski detailed Reade’s allegation and asked point-blank if he sexually assaulted her.

What are the allegations?

Tara Reade, a formed Biden staffer of the then-Senator in 1993, filed a criminal complaint with the Washington DC police on 9 April, accusing the ex-Delaware senator of sexually assaulting her.

The allegations were initially described on 25 March in an interview with podcast host Katie Halper. Reade claimed Biden pushed her against a wall and penetrated her with his fingers. When she pulled away, she says, he said he thought she “liked” him.

Additional attention to the Reade’s case was provoked by a CNN video clip from a 1993 Larry King show that emerged in late April. The video featured an anonymous call from a woman who Tara Reade argued was her mother. The conversation included the caller asking the host where to go with complaints regarding a “very prominent senator”.

On Monday, the Secretary of the Senate rejected a request from Biden to search for and release any records of Reade’s complaint against him in 1993.

Among the overall electorate, a separate Morning Consult poll tracking the 2020 presidential race, conducted 27 April – 3 May, found Biden’s standing unchanged in a head-to-head matchup against Trump, with 46 percent supporting him and 42 percent supporting the incumbent.